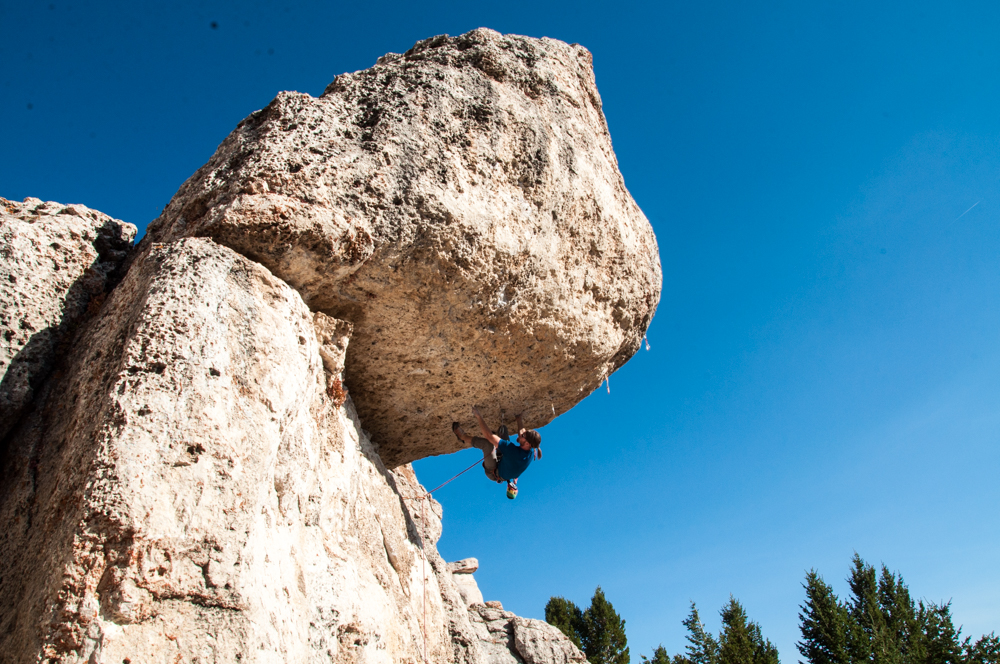 Welcome to the wild west of rock climbing. Perhaps I am stereotyping, but there seems to be an appropriate connection between Wyoming’s cowboy culture and a style of climbing that bucks most climbers off in less than 8 seconds. The spicy flavor of the climbing near Lander was full of powerful bouldery sequences, thought-provoking footwork and lots and lots of pockets!

The Town: The situation in Lander is pretty awesome for climbers; maybe it has something to do with the NOLS headquarters being there. You can camp for up to 3 days in the public park, there is plenty of free camping in the surrounding area and great camping is located near the OK Coral Wall in Wild Iris. In town, check out The Lander Bar for some grub and be sure to get some tape for those tweaking tendons at Wild Iris Mountain Sports.

The Rock: Though there is Sandstone and Granite as well, the most popular rock in the area is Dolomite, also known as dolostone. It is similar to limestone in composition, but it seems to be harder and more textured than most of the limestone I’ve climbed in Utah. This may be due to less traffic than SLC’s limestone areas. Either way, the dolomite of Sinks Canyon and Wild Iris make for phenomenal movement through aesthetic and inspiring features of rock. The movement is often sequential, with the occasional burly section which most often requires surmounting some head-like roof or bulge.

An example of some of the dolomite features common in Wild Iris.

The Sinks: Our first stop was the Killer Cave of Sinks Canyon. After arriving in Lander that afternoon, we drove about 15 minutes out of town to the huge dolomite wall that shows up on your right after some sandstone. Since the wall is south facing, most of the routes receive nearly all day sun, but the Killer Cave sees some late afternoon shade and a couple routes facing west are good to go in the morning. I am sure this is a phenomenal spot to escape the chiller temps soon to come, but we spent most of the time chasing the shade and running from the many rattle snakes that seemed to be doing the same thing. While our time was limited here, it seemed that those looking for big epic routes would prefer this over its shorter neighbor, Wild Iris.

An unknown climber on the thuggy jug fest of Bush Doctor (5.12a).

Wild Iris: While “The Sinks” had the tall atmospheric climbing, Wild Iris had a more aesthetic setting and remarkable, striking features. The walls there were mostly comprised of short, powerful routes that required technical footwork and strong fingers. The bright white walls appeared as if they had survived a barrage of bullets creating the entire spectrum of pockets from monster jugs to tiny crimps and monos. With shady belays in the trees, a higher elevation and some north and west facing walls, we were able to find better temps given the season, but I would assume this area goes out of season after the first couple of snowfalls.

Tips for climbing on dolomite:

1)     Remember your pockets for feet. Especially on vertical walls, pockets can be hard to see from above. Take note of pockets and their location as you use them for hands because they will often become useful feet later.

2)     Finger lock in narrow pockets. The sides of pockets and narrow vertical slots can be used like finger locks in a crack. Try incorporating some techniques from traditional climbing to fight the pump and rest in unassuming spots.

4)     Grip holds creatively. If a hold doesn’t seem useable, try regripping the hold a different way. With such a variety of small features, holds can be gripped in a variety of ways and often more than one feature can be incorporated into a great hold.