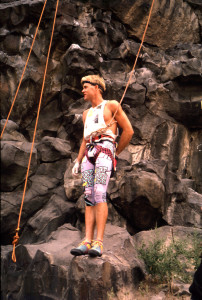 Drew at the Pocatello Pump in 1988

On a morning in 1984, the “young and arrogant” Drew Bedford approached Monkeyfinger with his partner Roger Amory.  This was the first route either of them attempted in Zion National Park and they freed the existing aid line.  After the ascent, they found it difficult to grade the route.  They knew it was the most difficult route either of them had done, so it had to be 5.11+ because neither of them had ever climbed 5.12.  Drew admits that it is, “a little sand baggy.”

Drew Bedford went on to establish over 20 5.12s in the Wasatch Range and many 5.11 and under routes.  The arrogance of his younger years has been left far behind and he is an incredibly nice individual. Thanks to him, we have a plethora of fantastic moderate and difficult routes to play on.  His route Orange Crush (5.13b), set in 1998, is still the most difficult sport route in Little Cottonwood canyon.

1. You established Discrepancy in 1981 at Seneca rock in West Virginia. Are you from the East?

I got my start climbing in Virginia at the age of thirteen. I cut my teeth at areas like Carderock, Great Falls and Old Rag. But I would have to say that learning to lead at Seneca Rocks in West Virginia was my biggest influence. Seneca climbing can be exposed, and the harder routes demand that you learn to place and trust small gear.

2. What brought you to Utah?

Climbing magazine #61. It had a feature article about Little Cottonwood. As a sophomore in high school, bitten hard by the climbing bug, it was a clarion call. I wanted to leave the east coast and go where I could major in climbing and skiing. I arrived in Utah as a freshman at the U of U in ’82.

3. Who do you look up to in the climbing world?

I’ve always been influenced by innovators like Wolfgang Gullich, Beat Kammerlander, Lynn Hill, Todd Skinner, Tommy Caldwell, Chris Sharma and Alex Honnold. Getting to climb with some of them has definitely transformed my perspective on what is possible.

Locally, the Wasatch is lucky to have such a vibrant climbing community full of people that provide new routes, stewardship, mentoring and stoke. The names I would list as influences would be too long, but it starts back with Les Ellison, who was willing to take a punk-ass kid under his wing and show him what Utah climbing was all about. I feel lucky to have found a niche in such a passionate and inclusive climbing community.

Drew on Half Dome in Yosemite National Park

4. Is your drive in climbing exploratory or difficulty?

For me it’s exploratory. I’ve never had the skill (or connective tissue) to get on the hardest routes. I’m motivated by the line – if it speaks to me, I want to climb it.

5. Which of your first ascents gave you the most satisfaction?

I really can’t say because they were all satisfying. Difficult first ascents are a rewarding process for me; discovery, hard prep work, frustration, breakthroughs and finally the send. Very satisfying.

6. You established one of the most classic aid lines in Zion National Park, Desert Shield (5.11a C3). Did you aid climb much before this ascent?

Aid climbing was just one of the disciplines we pursued as climbers. Bouldering, ice, mixed alpine routes, trad, big wall aid – they were all part of becoming a competent climber. El Capitan was the ultimate big wall for me, so I climbed it dozens of times. The “vertical camping trip” aspect was thrilling and totally unique.

Over time, the actual act of aid climbing lost its appeal for me. I really prefer the movement and challenge of free climbing. So, shortly after putting up Desert Shield, I sold off my aid and wall gear. I still do walls – I just try to do them free in a day.

7. Orange Crush (5.13b) has remained the most difficult sport route in Little Cottonwood canyon for many years. What was the process of establishing this line? Had it been “calling” you for a long time before you began projecting it?

Back in the day, after climbing Touch Up we would rap right over this steep line of faint holds that led to a beautiful arête. I eyed it many times during the era when rap drilling it probably would have gotten me run out of town. I recall one occasion when I tried testing some of the holds with a nut tool. I wound up getting covered in box elder beetles when one flake, behind which the beetles lived, snapped off in my lap.

For me, Orange Crush had two iterations. Todd Berlier and I bolted the line in the mid ‘90s and thought some of the holds needed reinforcing. We put epoxy behind the loose flakes, but there was so much dirt that the holds wouldn’t bond to the rock. We made a few half-hearted attempts at linking the moves, but the creaking flakes had us disheartened. So the route sat for a couple years.

I got fired up again in ’98 and decided the loose holds needed to go. After prying them off, the current line of edges was thankfully revealed. Doug Heinrich and I worked the route into the fall. On a crisp Rocktober day, it finally went down. Out of all my first ascents, I’m probably most proud of Orange Crush. It’s a striking line, with diverse and exciting moves.

Drew Bedford on his route Orange Crush 5.13b

That’s for others to judge. It’s definitely height related. We thought it was solid French 8a. In some places that’s 13b, in others easy 13c. That said, it may currently be the hardest roped climb in LCC, but there are way harder boulder problems in the canyon.

10. What advice do you have for SLC’s aspiring climbers?

#1 – Check your knot! It’s so basic, but experienced friends of mine have had close brushes with death.

#2 – Ask a lot of questions. There are so many talented and approachable climbers willing to offer advice, route recommends and beta. Shops like IME are another great resource.

#3- Be kind to your body. All those crimps and vicious campus sessions take their toll.

11. Can you think of a specific local route that offered a special learning experience?

Atmosphere at the Billboard. It requires the total package of steep skills, power endurance and technical subtleties. I’ve always been attracted to longer routes. But I didn’t have the steep power endurance required for Atmosphere. I’d do the burly hike, climb, fail, repeat. It started grinding me down. I finally created a specific training regimen. After a few weeks of system wall and 4x4s, it felt almost reasonable. It’s common knowledge now, but at that time (in the early 90’s) I learned that you can’t train for climbing by just going climbing.

12. What is more important in climbing; psych or strength?

I’d say the two are inextricably linked. Without both, you’re probably punting.

14. You climbed hard in a time when climbing was transitioning from aid to free climbing.  How were the energy, competition and ethics during this period?

Well the desire to free walls has always been there, both for me and within the sport. A lot of talented climbers like Dale Bard and Brooke Sandahl worked The Nose down to a few dozen points of aid before Lynn Hill freed it completely. In the late 90s, a lot of energy and competition transferred from crag routes to freeing big walls. Lynn, Tommy Caldwell, the Hubers – they all brought obvious talent and a new attitude to El Cap and other walls. I decided to make a movie, Big Stone, in ’99 to try and capture the big wall free climbing ethos. It was an exciting time.

15. What are some major differences in climbing from when you started to now, as far as climbers approach to climbing?

Specialization in one aspect of climbing is a newer development. I mentioned that my generation wanted to be all-arounders. Now there are people who just boulder, or only sport climb. For my part, I always felt my trad climbing helped my sport climbing and vice versa.

Well it’s not the green jello at Chuck O ‘Rama. Mainly, it’s the people and their good energy. That sense of community made it feel like home; a place where I wanted to put down roots and raise a family. I’ve traveled a fair amount. I always keep an eye open for the next great climbing mecca, but I’ve never found it. When you look at the climate and the number of major climbing areas within a few hours drive, Salt Lake is a great basecamp. There’s a wide diversity of rock types and with an international airport, we can be bouldering in Fontainebleau in about eleven hours. Not bad.

17. Why do you enjoy the Wasatch Range climbing?

Diversity and accessibility. Our climbing and skiing and trails are close by, and for now, pretty unrestricted. We need to work together to protect this gem we call home.

Drew on Limestone Cowboy 5.13b in American Fork Canyon. This route was established by Jeff Pedersen.

Jeff Pedersen, Kevin Bradburn and their team have crafted a network of gyms that are world-class. They never rest on their laurels or settle for mediocre design, coaching or route setting. They’re always learning and seeking out the next innovation. Momentum is a huge local resource that makes SLC stronger and more stoked. I’m just pissed it wasn’t around in 1982.

Climbing lets you visit amazing places and experience adventures most people will never know. But the most lasting thing I’ve gained from climbing has been the friends and partnerships I still have to this day. Keep them close. We share more than a rope.