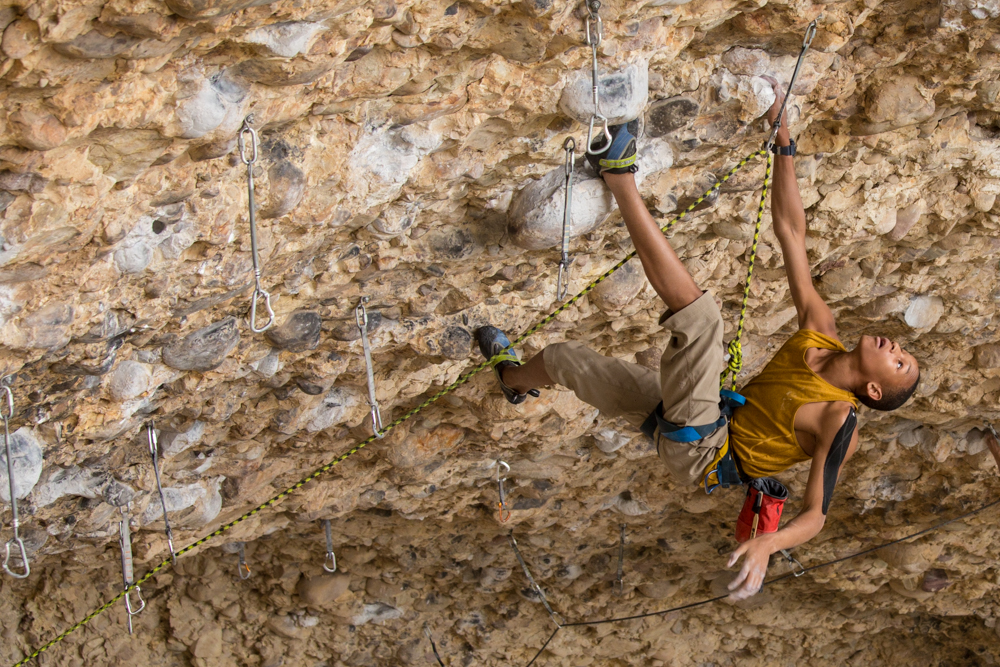 5.14 Onsight at 14: Kai Lightner goes to Maple with Team Momentum

On August 16th, Team Momentum took North Carolina youth climbing prodigy Kai Lightner to The Pipe Dream in Maple Canyon. The 14-year-old endurance master casually and methodically crawled upwards past hang-dogging climbers on the near horizontal roof of the cave. He seemed to be walking through climbs most mortals spend their summers projecting. With little interest in the many knee bar options most need to fight the pump (maybe he hasn’t learned that trick yet), Kai simply shook each hand every few moves and chatted calmly with those below. One campus move, some toe hook action and lots of lock-offs later, Kia onsighted The Pipe Dream (5.14a). This was Kai’s first onsight of a 5.14.

Months before, Kai was approached by Jeff Pedersen to compete in the 2014 Psicobloc Masters Series that was to be held in the evenings during the OR Tradeshow. At first the idea of competing in a speed based competition, above a pool with no ropes didn’t seem to interest Kai, who is hyper-focused on winning the Youth World Championships in September.  However, with some convincing from various peers and mentors, Kai decided to compete in competition while he was in for the tradeshow.

“Everyone in youth climbing already knows about Kai. He was a unanimous youth male invite to the Psicocomp,” said Momentum co-owner, Jeff Pedersen.

Jeff realized Kai’s trip would be the perfect opportunity to introduce him to cobble climbing, and after the Psicocomp, Team Momentum took Kai to the Utah endurance mecca.  Maple Canyon’s steep walls are covered with a variety of cobble stones and holes where those stones have fallen out. The climbs are generally very sustained and reward technical climbers who can hold on for a long time.

“I thought it would be really interesting to see Kai climbing in a place like Maple,” explained Jeff. “What is remarkable about Kai is how quickly he gets into perfect body positions. He seamlessly and effortlessly moves from one perfect body position to another perfect position, wasting very little energy along the way.”

Despite his many phenomenal outdoor performances, Kai rarely has an opportunity to climb outside. Living in Fayetteville, NC, Kai is limited to the occasional weekend trip to the Red River Gorge or New River Gorge and spends most of his time training and climbing inside. Kai has spent much of his recent time indoors preparing for the world championships, but welcomed the chance to get outside to a new location where he could learn about a new rock type.

“It was very different and hard to read. You had to feel your way around and there was more thinking than other places I’ve been,” recalled Kai. “You had to figure out which cobbles to grab and the rock color sometimes made the chalk marks hard to see.”

Despite this being Kai’s first time climbing on cobbles, the young climber didn’t seem to have too much trouble finding the right holds as he cruised a 5.11 warmup, followed by Mexican Rodeo (5.13d) and then onsighted The Pipe Dream (5.14a). After his first ever 5.14 onsight, Kai got some beta in hopes of flashing Divine Fury (5.14b), but slipped out of an early knee bar sequence. He went on to send the route on his second go.

Though both Kai and his mother were impressed by all they had seen and done on the trip, they had the most to say about the SLC climbing community.

“You guys have a great group of parents and kids,” raved Connie Lightner. “We wish Kai was in a community as active with climbing as Salt Lake City… All the parents and kids were wonderful.”