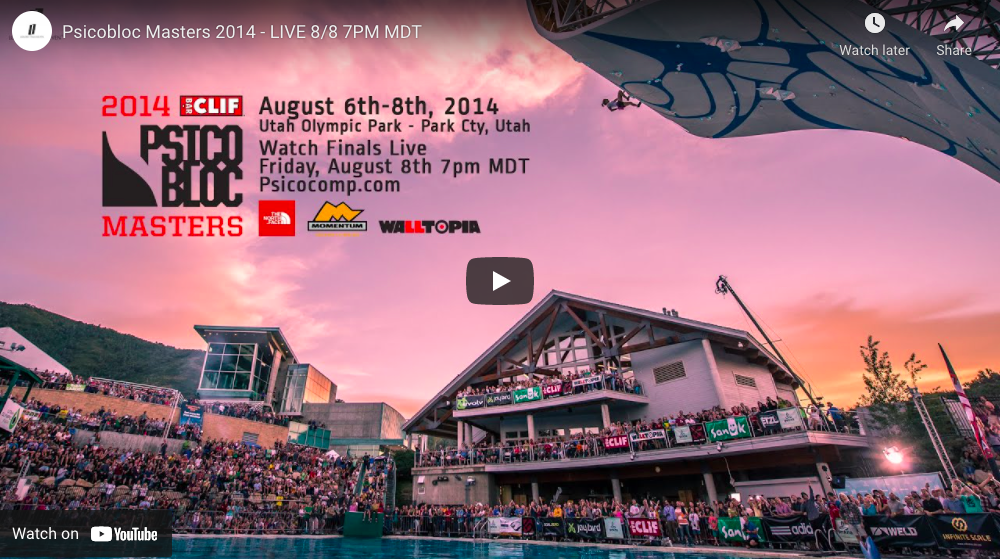 On August 8th, Clif Bar held a $30,000 drag race between 32 of the world’s best climbers in Park City Utah. The second annual PsicoComp pitted climbers in a head to head battle on a 55 foot tall wall above an Olympic pool. With former winner Sasha Digulian on the mend with a finger injury, the women’s field was open to dark horse climber Claire Branff, last year’s winner Delaney Miller and power house climber Alex Puccio. In the men’s competition, everyone wondered if Sharma would win his own comp or would it be incumbent Jimmy Webb, or World Cup winner Sean McColl. Regardless of who won, the comp promised to be more action packed and spectator friendly than any other climbing competition in history.

The PsicoComp idea originated from Chris Sharma and Mike Call, who were deep water soloing in Mallorca Spain four years ago. The climbers realized the excitement of climbing high above the water and wanted to transport the experience to a US audience. When the opportunity arose to use the ten foot deep Olympic pool at the Park City training area, the pair seized the opportunity to build a 55 foot wall over the water with Walltopia.

Within six months, the PsicoComp established an amazing event. 5,000 people watched live with and an audience of 55,000 viewed the excitement online, making the PsicoComp the most viewed climbing competition in history. This year’s PsicoComp promised to be better with the increased sponsorship and support. The Louder than 11 production crew ran a half dozen cameras over the pool and wall, shooting between amazing shots of the climbers and the commentators, Brian Runnels and Chris Weidner. Jonathan Thesenga returned to MC the event while two DJS spun beats to the climbers.

Spanish climbing legend Dani Andrada and the Godfather of Deep Water Soloing, Miguel Riera set the 5.13 route for women and 5.14 route for men. They set for a much deeper and more elite field of climbers including Chris Sharma, Nalle Hukatavalle, Ashima Shiraishi, Sasha Digulian and other. “The route was hard at the top,” said World Cup winner Sean McColl. “It was perfectly set,”

The style of the climbing is “Not like a route climbing comp,” said executive producer Mike Call. “Or like a long boulder problem comp. It’s a new comp genre in terms of length and fitness. If you want to win you have to climb the wall multiple times and faster than the other person.” The climbers will be raced elimination style.

The women’s field started with young Texas climber Claire Buhrfiend racing Salt Lake local, Jacinda Hunter. The women fought up the wall, completing the route in approximately 3 minutes, hitting wild gaston moves and feet cutting dynos. Claire pulled away to the top and advanced to the next round.

In the first round thirteen year old, Ashima Shirashi was seeded against Alex Johnson, a woman twice her age and height. Despite the big differences in size and age, Ashima pulled away, giving the incredible V13 crusher a pass into the next round.

In the last light, Alex Puccio beat out Ashima. In one of the most exciting matches of the night, Buhrfiend raced Puccio in semi finals. The pair topped out a second apart and judges referred to Louder Than 11 footage to catch Buhrfiend’s half second win.

The first race for the men pitted Isaac Caldiero against Sean McColl. Caldiero suffered a bad fall the previous day. When he fell from high on the wall, he flipped and smashed into the water, hitting the side of his head. He left the pool with poor equilibrium and holding his ear. A doctor diagnosed him with a ruptured ear drum. Despite the injury, the doctor cleared Caldiero, who raced with a large earplug in. The falls rattled some of the competitors. The next day, Daniel Woods suffered serious bruising on his arms from not tucking his arms in when he fell from the wall. There was a serious need for the climbers to fall well into the water. The crowd did countdowns from the top of the wall and many of the competitors did pencil dives into the pool.

“Climbing on the wall was extremely terrifying to say the least! But at the same time it’s exhilarating and a ton of fun. Especially in front of the crowd during finals!” said Kyra Condie.

As the sun set in the quarterfinals between Ashima and Puccio, the women topped out and then down climbed the head wall together to shorten the jump. The heights obviously affected the climbers.

“It’s a little bit scary,” said Sean McColl who took a spinning fall the day before. Despite the obvious dangers of the climbing Sean Mccoll dropped his chalkbag at the base and left the competition in his dust. Where the women had completed the route in two minutes, the men ran up the wall in 60 seconds and less. McColl clocked in times of sub 40 seconds on the wall. In a race against last year’s winner Jimmy Webb, McColl campused across the top.
Racing against favored winner, Chris Sharma, McColl performed a footless cross 40 feet above the water. Sharma must have felt the pressure. He threw for the last hold and made a huge splash into the pool. Racing neck and neck in Men’s semi finals, Daniel Woods barely pulled ahead of Carlo Traversi. This pitted him against McColl for the prize of the Men’s 2014 PsicoComp championship. In the women’s Delaney Miller fought to take first this year against Claire Buhrfiend to win the women’s. The pair topped out seconds apart. They stood on top held hands and jumped into the water together. Buhrfiend swam out of the pool the winner of this year’s PsicoComp while Miller made a strong second place. The Men’s final came to McColl and Woods. McColl showed off his consistent performance. He climbed fastest on his last lap on the wall and handily beat Woods for the win. The PsicoComp brought thousands of climbers to Park City and tens of thousands more watched the live broadcast. The excitement of watching some of the world’s best climbers race up an overhanging wall made the event popular. The competition ran much smoother than last year’s and if climbing can continue on this path, it stands a strong chance of being in the Olympics soon.