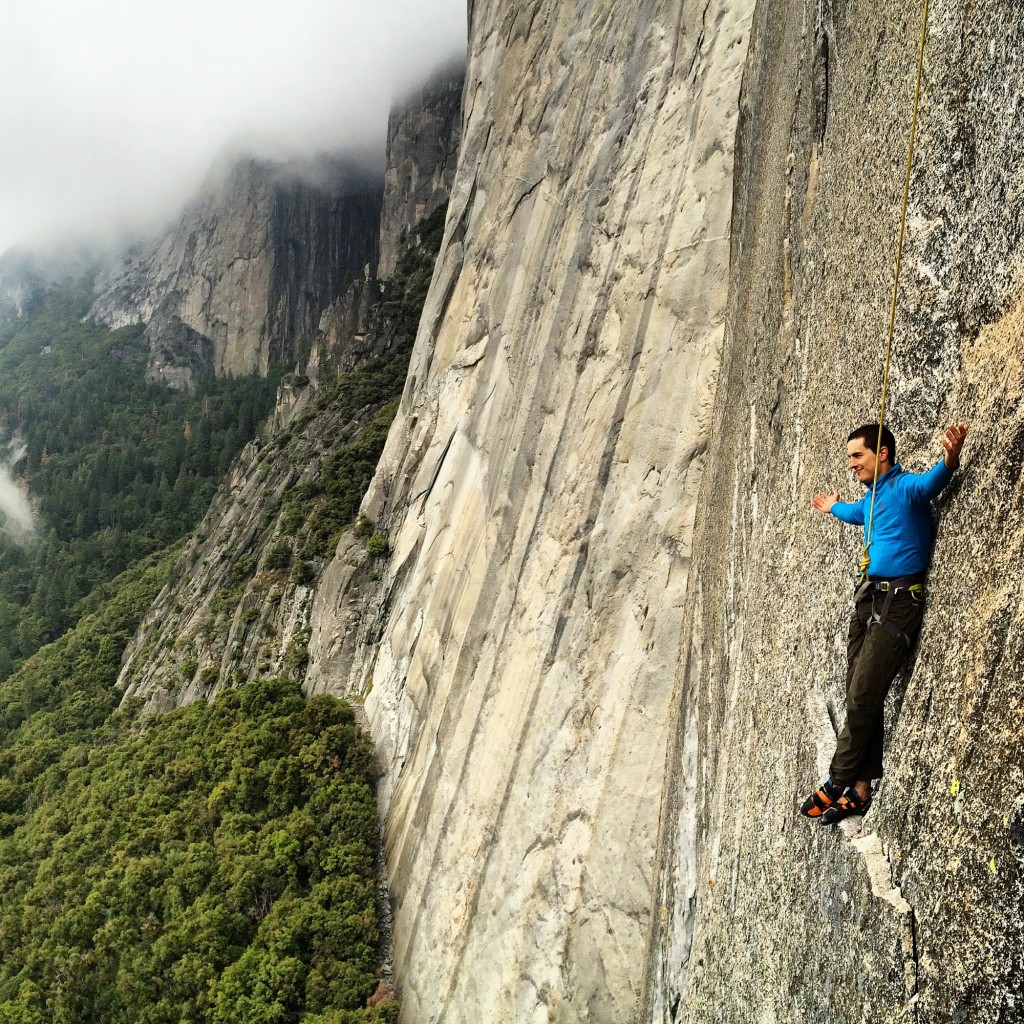 The topo photo of the Heart Route.

While free climbing El Cap’s Golden Gate in 2009, I spotted a system of beautiful cracks and corners leading out of the left side of the massive heart-shaped recess in the middle El Cap’s southwest face. The steep crack system I was looking at belonged to the Heart Route, a natural line first climbed in 1970 by Scott Davis and Chuck Kroger.  In an under-the-radar ascent, done in impeccable style, Kroger and Davis completed the first ascent in a bold 8 day push. I believe it was the 7th route up El Cap. The upper part of the Heart Route went free when Huber climbed “Golden Gate,” but everything below remained a forgotten aid climb.

Exploring and establishing first ascents has always been the most intriguing part of climbing for me, so I started checking out the route as soon as I could. After a few solo missions on the route, I enlisted the help of my good friend Brad Gobright, a strong climber who at the time was working at the Ahwahnee Hotel. It wasn’t long before we were completely consumed by the project. Brad and I put a lot of time and effort into the route- bolting variations, cleaning out cracks, scrubbing holds and of course climbing. The route boasted some mind blowing terrain, like the exposed roof pitch and the wildly technical slab getting to heart ledge. We knew we had something special.

Brad takes it all in below the 5th pitch.

After a couple seasons of attempts, the first free ascent still eluded us. At some point the whole project got put on the back burner as Brad and I focused on other things and by 2015 it had been over two years since I had even climbed El Cap. Instead of bigwall adventures, I had been focusing on shorter trad climbs and bouldering. I began to wonder if I still possessed the skill, and mad determination required to free El Cap. Then the Dawn Wall went free, and something clicked. Kevin Jorgeson asked the world, “What’s your Dawn Wall?” I was reminded that my Dawn Wall was just a few routes left of THE Dawn Wall. The Heart Route was there waiting for us, all equipped and ready to go. Pretty soon I began daydreaming of golden granite, portaledges, and the pine trees- so small when viewed from a vertical kilometer above the ground.

Brad and I met up in Valley in the spring. We were psyched and got straight to work. The first seven pitches of the free Heart Route, the “Heart Blast,” feels almost like a route in itself. Pitch 6, the “Dub Step” has the hardest moves of the route; a difficult slab down-climb that leads to an outrageous, sideways dyno. The next pitch is the slab getting to Heart Ledge. At first glance this section of rock looked impossible to climb, but after closer inspection we found a line of small holds, some no bigger than the side of a nickel! The majority of the free climbs on El Cap’s southwest face begin on the Free Blast, a 10 pitch 5.11. The Free Blast has become the go-to highway to access the different free climbing options overhead. We knew there had to be an alternate, more direct way to access the Heart, and it became very important to us to find this passage. The biggest question marks on the route were on these pitches, and it was an exhilarating process to find the way.

The steepest climbing is in the middle of the wall, starting with the roof pitch. Here the route climbs thru classic El Cap terrain- exposed, and sweeping golden granite. Two long pitches of 5.13 guard this section, as well a bouldery arête. Above is a spooky 5.11R/X flake before the angle eases. Another wild crack pitch marks the end of our new free terrain, and the route joins the Golden Gate to the top.

We spent six days on the wall on our final push as our good friends Ben Ditto and Cheyne Lempe accompanied us to document the ascent.  With our camp set up right below the Heart Roof, we were spared the intense heat and sun that plagued the wall every afternoon. This all-day-shade spot was a crucial location for our vertical base camp. Above camp was the meat of the hard climbing. With each pitch, the reality of completing the route grew and grew. Although the hardest single moves were on the “Dub Step,” The biggest challenge during the final push was mostly mental for me. I had a cold the first couple days on the wall, and I also injured my shoulder about a week before we set off, which worsened with each pitch. I was definitely in full battle mode up there. Brad, by contrast, was operating the best I’ve ever seen him climb. We were all a little doubtful about whether or not I was going to be able to follow the final 5.13 arête!

By the skin of my teeth I was able to climb the final cruxes, and with only a day and a half before I had to catch a flight out of SLC, we jugged to our high point and climbed the final eight pitches to the top, completing the first free ascent. The final pitch of any El Cap route is a special thing. Totally exposed above the valley floor, worked to the core, slaying a dragon that has haunted me for five years: It’s a profound time and place.