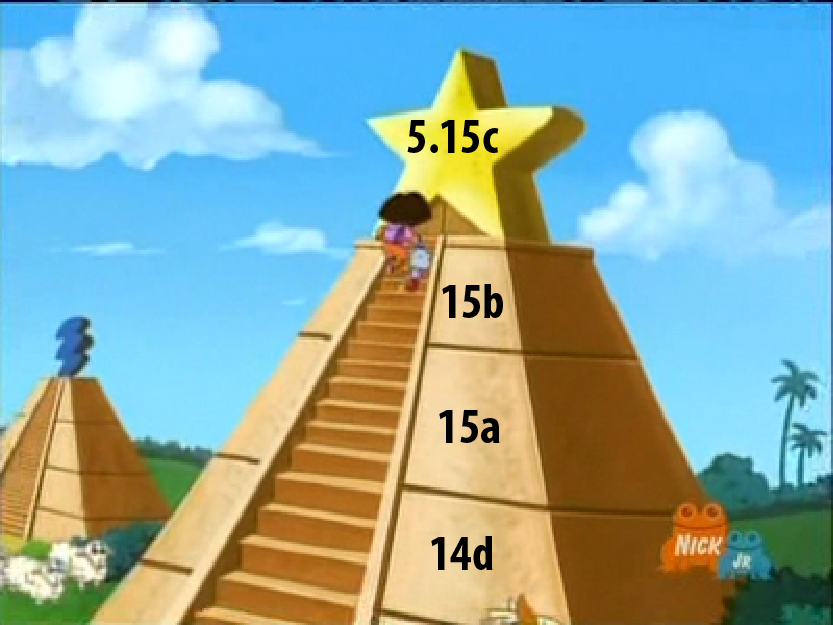 Dora the explorer started using SMART Goals at an early age and now she is getting close to her long-term goal of sending 15c!

Last year, my season started strong, but I ended my summer out of shape, injured and discouraged. ‘What did I do wrong?’ I asked myself. I had started the season completing a long term project as well as a couple more routes at my limit, but when I tried to up the grade just slightly, things started going South. As I dogged, whipped and jugged my face off I was slowly losing my route fitness. As I bouldered the same shouldery cruxes over and over again, I began to wear away at the shoulders I had considered one of my strengths. As the temperatures dropped and conditions improved, my fitness continued to decline and shoulder pain plagued every move. I tucked my dogging tail and ran inside to lick my wounds and climb in the gym for the winter.

Determined not to make the same mistakes as last season, I swore to diversify my projecting in hopes of preventing injury and helping to maintain a well-rounded fitness and skill base. Steve Maisch, Momentum’s new training guru, convinced me that incorporating a route pyramid would help me to preserve fitness while continuing to project several routes near my limit. Given my struggle fest at the end of last season, I decided to try it out and was not disappointed. The pyramid acted not only as a way to build the fitness needed to move onto harder and harder projects, but also gave me smaller goals that allowed me to feel accomplished even when too exhausted for burns on a project.

The pyramids come in a variety of forms and can be utilized in a variety of ways. They can be applied to route climbing, bouldering or even training. Climbers differ on the exact structure and sequence of their pyramid. In my pyramid, I allowed myself to work on multiple levels at a time and often used grades from the base of my pyramid as a way to warm up or cool down from a day of projecting on harder routes. Some people work from the bottom row and only move up after completing that row. I believe either option is acceptable as long as you don’t get too stuck on only more difficult grades. Remember, the goal is to be redpointing and redpointing often. For more information about routes pyramids check out Steve Maisch’s blog (link).

While the pyramid is definitely a useful tool for developing fitness, it is not necessarily right for every climber. I didn’t need the route pyramid to succeed (though it helped and was really motivating), but I did need a defined goal. I needed a goal that wasn’t just a single route or grade, but rather one that allowed me to achieve that end in an intelligent way. I needed incremental goals that together would make me a climber who could send a specific route or grade as opposed to just dogging my way to weeks of rehab. While I can’t tell anyone what their goals should be, I can provide some suggestions for elements those goals should have. Many people refer to these elements by the acronym S.M.A.R.T.

S.M.A.R.T. goals can be applied to almost anyone for anything. These could be used to achieve success in school, work or, in this case, climbing. You might be seeking the ability to climb the next difficulty or looking for a way to get over a specific fear. They can be used for bouldering in the gym or as a way to make preparations for a long alpine climb more manageable. So if this summer seems to lack direction or focus, try setting some S.M.A.R.T. goals for yourself with the acronym below to guide you.

S = Specific: Avoid making vague goals. You are more likely to complete a specific goal than a general goal that lacks detail. To make sure your goal is specific ask yourself the “W” questions: Who is involved? What do I want to accomplish? Where is the location of my goal? When do I want to complete my goal? Why/What are the specific reasons, purpose or benefits of accomplishing the goal?

A = Achievable: This is quite possibly the most important aspect of goal setting. If your goals is to solo on-sight 5.14, you have done yourself a horrible disservice. You put yourself at risk  in attempting such an ambitious/stupid goal, not to mention the frustration you’ll experience  if you are never able to reach unattainable goals. It will make it nearly impossible to stay motivated. Goal setting is meant to help motivate you by pushing you to achieve specific objectives, and making certain those objectives are attainable is the first step to ticking them off and feeling confident as you set further goals.

R = Relevant: Relevance is whether or not something   is actually making you better at the desired thing you wish to be better at. If your ultimate goal is to get better at traditional climbing, completing a route pyramid in American Fork may get you fit, but it isn’t really tackling the overall goal, which is to become a better trad climber. You would be better served to spend your time working on several routes in Little Cottonwood Canyon and doing volume on the cracks at either Momentum.

T = Trackable: It is very beneficial to be able to monitor your progress while working on a goal. It is often hard to stay motivated when you have no idea how far away a goal is or how far you have come since starting. When projecting a route, I often break it down into sections I want to link before I look at the larger goal of redpointing the route. This allows me to make incremental improvement by breaking my goal into achievable segments or stepping stones. I will strive to get every move figured out, then pursue an attempt with one hang before setting my sights on a redpoint. Of course I always go for the top, but achieving a high point can be a day’s goal and allows you to see improvement before going on to actually crushing your goal.

This spring my route pyramid turned out to be a great goal for me that provided motivation while helping me maintain fitness and have fun while doing it. It gave me an opportunity to solidify myself at a specific fitness level that I had not been able to attain previously. While I will not always choose pyramids to facilitate my improvement, I will always make certain my climbing goals are well defined, motivating and help me to improve as a well-rounded climber. As I head indoors to train during the hotter months, I am already thinking about my goals for training and for the upcoming fall season.