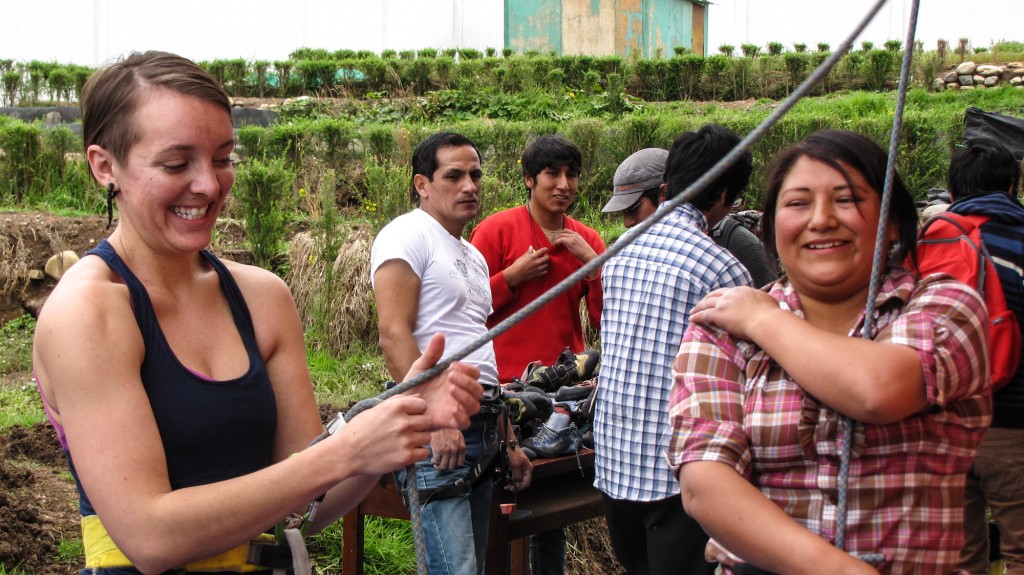 Sometimes it is easy to forget that the access we have to recreation is special. Our ability to play outside is greatly improved by our proximity to the Wasatch, our access to indoor gyms and the expendable incomes that we take for granted. We can learn from professionals, buy the gear we need and access almost any type of terrain we want with little effort. Others are not so fortunate; something that Millcreek’s Mo Minis head coach Nikki McGee got to experience first-hand when she took gear donations to a technical college in Hauraz, Peru.

“Outside of the college they built a homemade wall that stood 20 feet tall. They had 3 anchors and 5 routes with only a few homemade holds. One of the students learned to make holds as a class project and they built the wall together as a class. They had only one rope that they supposedly tied around their waists as they climbed in tennis shoes,” describes Nikki.

A ceremony in celebration of the donated gear brought down by Nikki. Nikki (sunglasses) and her husband are in the center with Maruja (Gilfs wife) and Gilf to her right.

Prior to this Nikki’s first trips to South America were for work, kayaking and climbing. However, when she came home from a trip in 2013, she longed to return to the region. So when Nikki heard that Momentum Member Kirk Marshall was collecting donations for School El Instituto Superior Technologico Publico Eleazar Guzman Barron, she jumped at the opportunity to take the gear down herself.

“I fell in love with the culture after having only lived in the US. In Peru especially, there is an incredibly rich culture that is apparent in their everyday lives. There is something so humbling and accepting about being there.”

In the climbing hub that is Salt Lake, it was no surprise that Kirk was able to collect tons of gear. With 8 ropes, over 20 harnesses, some Black Diamond packs and lots of shoes, belay devices and chalk bags in tow, Nikki and her husband Erkki traveled to Hauraz, Peru. The gear she was able to give to the school was valued at $10,000 in the U.S. but this might cost upwards of $30,000 if purchased locally with its limited availability and taxes.

“I was beyond impressed by their abilities and positive outlook given their lack of resources. They are so grateful to have any gear they can get because they don’t have much. They are good climbers without the gear, but with the donations we’ve been able to collect they were able to do things safer and more comfortably.”

Many of their hand holds were poured by a student of the tourism and guide program there.

After spending time with Gilf and the local community Nikki, was given the opportunity to climb with some of the local females who aspire to work in the tourism industry which made quite the impact. Gilf invited Nikki back to teach in hopes female instructors may help inspire women to break social norms and consider guiding and climbing. Nikki plans to return as their first female instructor in March and October.

Nikki belays a local lady who had never climbed before.

“This is the only program of its type in the area that will take women. It’s not that people aren’t willing to make or accept this kind of shift, as much as it hasn’t happened yet” says Nikki. “They want to be empowered to hike mountains by themselves or go rock climbing, but they don’t have many female role models to teach them. It can be really intimidating to learn from only men and I think it is really important to have women teaching women.”

With the help of The Danielle Lin Show and others, Nikki has several trips planned to teach fitness, stewardship and female empowerment. She has set up a non-profit to help her raise money for return trips and is collecting more donations of everything from furniture to climbing gear and training tools.

To learn more about Nikki’s efforts and how you can help the cause, visit Safeguides.org. The website is brand new so keep checking back for updates!