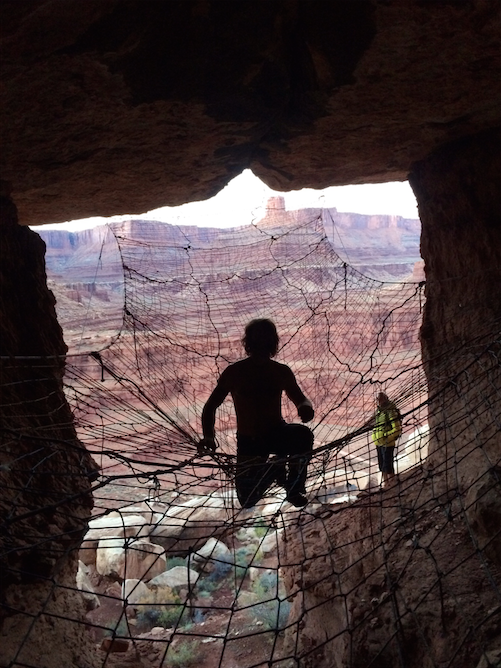 Halfway out a 50 foot roof crack, I desperately stabbed for a thin hand-jam. I was 40 feet off the ground, without the protection of a rope, and exhausted. I caught the jam, but knew I couldn’t make another move. I looked down at the rocks below me, and held on a little harder, but it wasn’t enough. My hands and feet disconnected from the horizontal roof, and I fell… into a giant circus net!

This past fall I spent a few weeks in Moab, climbing around the desert, doing first ascents, and looking for hard crack climbs. I didn’t climb much over the summer because of an injury, but I was slowly getting back on the bandwagon. I wasn’t exactly in 5.14 shape, so I needed to find something different––a comeback project if you will. During a back-porch brainstorming session, my friend Andy Lewis told me about a wild conglomerate of nets he planned to stretch over a massive canyon. That sounds nuts, I thought. I would have gladly lent my hand to the endeavor, but the pioneering megalomaniac inside me wanted my own project––I wonder if you could use the net as fall protection? It wouldn’t be the first time someone climbed above a net; Canadian Matt Madaloni rigged a fishing net under a short route in Squamish a while back. The viral video of Matt tumbling into the net made it look terrifying, but kinda cool.

I racked my brain for a route that could be climbed over a net. It would have to be pretty short, or traversing, or… a roof crack? A long roof crack would allow the perfect application of a net. I recalled a long roof I had found a few years prior, and immediately rallied out into the desert to inspect it. With a long tape measure I calculated the rough dimensions. The net would have to be approximately… 20 by 50 feet. Yikes. That would take weeks to weave a net that big. I returned home dissuaded, and ready to forget the whole idea. I told my friends the dilemma, and how I thought the project wasn’t feasible. “50 by 20?” Andy said, “That’s pretty chill dude, you could weave that in a few days.” That was all the push I needed, so I went ahead and purchased ten thousand feet of parachute cord. I would weave a giant net, rig it under an unclimbed roof crack, and climb the first ascent.

Weaving the net was excruciatingly boring. I got up early in the morning and basically tied clove hitch knots all day. When I closed my eyes to go to sleep, all I could think about was my hands tying clove hitches. It was really disturbing. By the end of day four, I was completely deranged, but the net was finished. I excitedly told friends about my plan to rig this big circus net up under a roof crack. I got a few different reactions. Some said, “Wow! Awesome! Let me know when you’re going to rig it!” but most said something along the lines of, “Huh. Why don’t you just climb it with traditional protection?” Maybe they were right, why not just climb it traditionally and move onto the next project? I began to doubt myself. I had just spent 4 days alone in a field, tying clove hitches. The project was, so far, a pretty big waste of time.

Halfway done with the weaving.

Luckily, I didn’t have anything better to do so I roped my girlfriend Ally, and my friend Niels into the adventure. We loaded up the truck with a bunch of ropes, gear, and one 70lb circus net and headed out. As predicted, the rigging process was incredibly complicated, and took us all day. Equalized removable anchors, down tensioned guy-ropes, de-tensioning, repositioning, re-tensioning. It required all our combined knowledge to get the net in the perfect position. The sun was setting as I tensioned the final line. “I guess that’s it,” I proclaimed. Niels looked at me, “you’re up!”

I gingerly crawled onto the net, and grabbed onto the starting holds of the roof. “Okay, okay, okay. Just climb it without falling, de-rig the net tomorrow, and you’ll never have to find out if it works. You can do it!” I pulled onto the rock, and started climbing. The initial sequence involved a difficult reach into a flaring slot. Twisting my hands awkwardly into the crack, I advanced ten feet over the net, with the ground another 40 feet down. “Oh man I DO NOT feel safe right now.” The only thing between me and disfigurement, was some loosely woven 3-millimeter cord I could barely see. After only 15 feet of climbing I began to feel the fatigue of the route, and the crack pinched down to finger-size. I was dubious of the “safety net” below me. I began to doubt our testing process of making up some numbers, adding them up, and  thinking it sounded okay. With this in the back of my mind, I started over-gripping the rock, and got twisted up in an the wrong sequence of movements. Totally stuck, I let go. Before I could scream, the net caught me in a gentle “whoosh.” We all let out a sigh of relief and burst into hysterical laughter. Lying in the net was awesomely exposed, yet safe; like an amendment to gravity.

Niels and I each had a couple goes trying the moves out the roof. Once you fell, though, you had to start from the beginning, since you couldn’t reach the crack from the net. It forced us into the traditional ethic of not hanging on a protection rope to rehearse sequences. On my last go I made it to the lip of the 50’ monster roof, but my blood-engorged arms couldn’t quite get me over the top. Once again I back-flopped into net. We walked back to the car in darkness, buzzing about our new creation, excited to return the next day.

Driving back to town that night we received the tragic news that my sister Eliza’s boyfriend, Ethan, had died in climbing accident in Yosemite. We went from the highest of highs to the lowest of lows. It was a crushing blow to my sister, and my family. I spent the following few days with my sister and father, along with Ethan’s family, in Yosemite. I was reminded how special it was to be alive; it could have so easily been me.

I left for a trip overseas less than 24 hours after returning from Yosemite, with the net still out in the desert. My unusually busy schedule wouldn’t allow me to get back out to the roof for several weeks, and I feared that my gear might either be stolen or confiscated. In light of recent events it was easy to remember that gear is just gear, and it can always be replaced. With the net strung up over the remote desert, I headed off on my trip.

Fast forward through a couple weeks in Malta, and a quick trip to Michigan, and I was back in Moab with my two sisters and Ally, for Thanksgiving week. A group of us headed out to the net on a gloomy day. As the dark cave that houses the crack came into view, I was delighted to see the net was right where we’d left it. Eliza’s roommate, Tim, and I taped our hands underneath the monster roof. Once again I started out the crack, but fell at the tricky sequence 20’ out. On the next go I solved the puzzling movement with some dramatic feet swinging, and made my way out to the lip. I found a nice rest at the end of the roof, jamming my knee into the crack, and tried to recover by shaking my arms. I glanced down at the net 15’ below me, and the ground, now 80’ below. What a wild position! I launched into the flaring jams, and inched my way around the awkward lip. I was going all-in, desperately stabbing for each next jam, expecting to lose it at any moment. I pulled over the top in total exhaustion, but elated to have climbed the route in such a bizarre style. I called it- Woo Goes to Circus Camp, 5.13.

Eliza, my youngest sister Alex, and I de-rigged the net later that week as snow began to fall. Spending time with my family in the desert reminded me that these silly projects can sometimes be the most important. While net-soloing might not be the future of climbing, I’ll be keeping my eye out for more spots to put it into action.