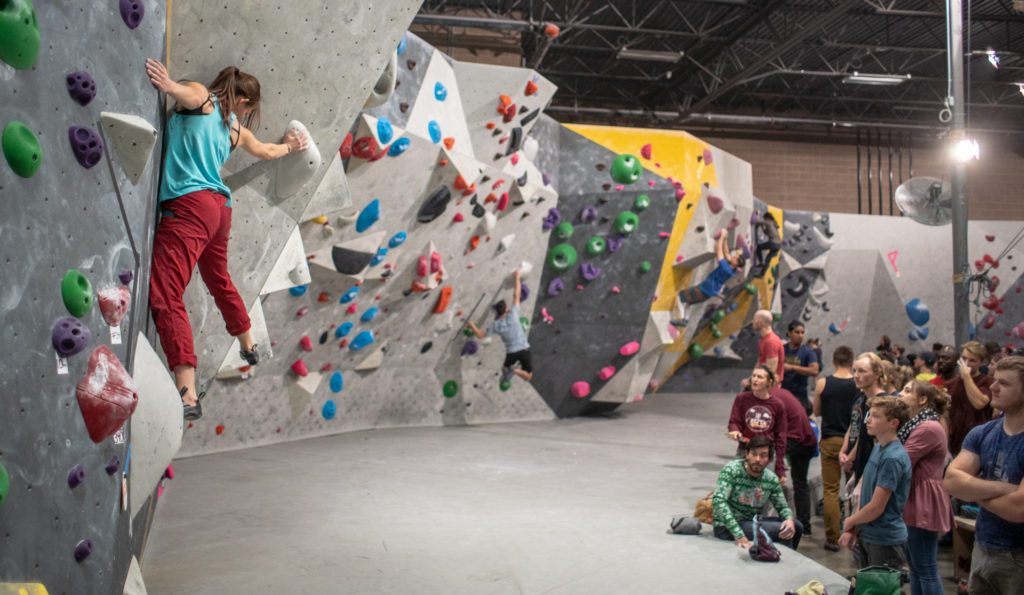 As the sun sets earlier and earlier, the temperatures drop, and the mountains are blanketed in the season’s first snowfall, climbers start the annual migration from outdoor climbing areas to the one crag that won’t ever get soggy, sub-zero, or snowed out… Momentum! Whether you’re a weekend desert rat or ice climber in need of a weekday training zone, a student in need of some active study-breaks in the bouldering area, a rope climber looking to maintain your endurance over the winter, or just looking for a place to climb and hang when it gets dark at four in the afternoon, we’ve got your back. Each year, Momentum Utah offers zero enrollment fees on all EFT memberships all weekend at the Back2Plastic event, and to celebrate the fun, we host a bouldering competition at Lehi.

The B2P Comp is citizens only, meaning no professional climbers compete, so everyday Momentum climbers get to put their climbing chops to the test. Categories range from beginner to expert, so no matter your ability level, you have the opportunity to experience the buzz and excitement of competition climbing.

There were fist bumps for days!

Cruising up a problem on the top-out boulder. Momentum Lehi is the only gym in Utah that has one!

Spider-Man swings in for the campus move––no web assistance needed!

Just airing it out!

This competition is structured in redpoint format, which offers a multitude of different climbing routes and requires a bit of strategy on the competitor’s behalf. Each climb is assigned a number of points based on its difficulty level, and those points are earned when a climber finishes the route. Climbers can attempt as many problems as many times as they like, but you can only climb for so long before you’re toast––that’s where the strategy comes in! For the B2P Comp, a climber’s top four completed problems count towards their final score.

This competition had judges who monitored the lanes allowing for everyone to get on the wall safely without fighting for burns.

The line system allows for everyone to get a turn with a clean landing. Inadvertently, it forces climbers to rest more, learn beta, and cheer for their friends!

This purple problem was one of the most popular boulders at the competition. It’s hard to beat fun, competition-style movement on positive holds!

Thanks to support from our rockin’ sponsors, every comp participant received a swag bag filled with little goodies and we raffled off prizes to lucky ticket-holders. Climbers at the event had a chance to try out shoes from Black Diamond, bars from Kind Bar, Red Bull, and liquid chalk from Midas, a local Provo company.

Many thanks to our sponsors. Ice-cold cans of Red Bull keep you energized and feels great on raw skin!

Who’s got the lucky number?!

Congratulations to our podium finishers in every category! If you see them in the gym, give ’em a well-deserved high five.

The tricky kneebar finish of the white world-cup boulder.

Sometimes you just have to give it another go after the competition is over.

Shoutout to our event sponsors: Black Diamond, Scarpa, Evolv, Friction Labs, Gnarly Nutrition, Kind Bar, Red Bull, Midas Liquid Chalk, and Joshua Tree––we couldn’t have done it without you. And finally, all of us at Momentum would like to extend a big thank you to everyone who came out to climb and cheer at this year’s Back2Plastic Comp. We’re psyched to share the indoor climbing season with you all, and we can’t wait for the next comp!