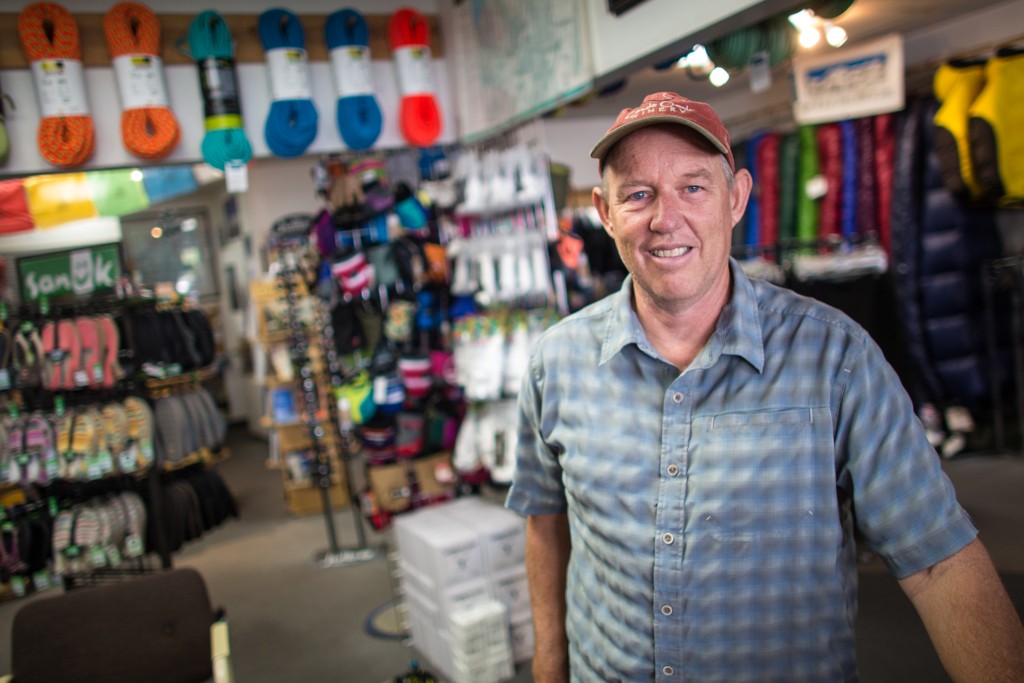 An Interview with Scott Carson

Scott Carson had a respectable job as a planner for an aerospace missile company in California.  He was working 70+ hour weeks and only succeeding in decreasing his happiness, so he packed his bags and moved to Salt Lake City to attend engineering school.  While riding his bike up Little Cottonwood Canyon he saw rock climbers.  With a full tank of psych and zero experience, he on-sighted Satan’s Corner with only a few pieces of marginal protection.

His legs convulsed with adrenaline as he drove home from this first experience on rock and he was hooked.  Scott was fortunate enough to have legends Steve Petro and Johnny Woodward as his climbing mentors.  Steve Petro taught Scott how to climb and Johnny helped Scott develop his “eye” for first ascents.  Scott’s school schedule allotted him 4 day weekends and he took full advantage of them by driving to Indian Creek each weekend inspired by the aesthetic cracks, landscape, adventure, and endless first ascent potential.

You learned how to ringlock/finger stack on “Tricks Are For Kids” (5.13). How did this shape your climbing from that point forward? Would you say this is one of the routes that you learned the most from, or was there another?

“I had been climbing for 18 months when Steve Petro asked me to belay him on ‘Tricks.’ I still remember how inspired I felt seeing that amazing line for the first time…you just don’t run into cracks that are that strikingly beautiful very often. I was always more attracted to the aesthetics of a line rather than the difficulty or movement aspects. Needless to say, upon seeing ‘Tricks’ for the first time, I knew that one day I would climb it.”

You worked as a planner for an aerospace missile company in California.  Then moved out to Utah and became a climbing bum.  How did your parents feel about this? Why the drastic change?

“I really enjoyed the work and the team that I worked with. However, considering the years of long hours and the lack of life outside of work, I realized a change needed to happen. My parents were always supportive and encouraging. My Dad once told me that I should seek as many experiences as possible. Of course, I was expected to complete a college education and become self-supporting. But he had watched too many of his colleagues implode in mid-life crisis and theorized they never took the time to experience life and adventure when they were young…no red sports car in my life.”

With a vague description of Lisa’s Shoulder (and lack of knowledge about what R ratings were), you on-sighted it as one of your first rock climbs with a set of stoppers, 2 hexes, and 2 cams.   In modern climbing, we are able to easily avoid these adventures, however, in your generation most of the climbing was committing, sometimes downright dangerous.  How do you think this differentiates the characteristics of modern climber versus your generation?

“I didn’t have the experience or the correct gear and seriously scared myself half to death…falling or hanging was not an option.”

After your daughter was born, you continued to take trips to Indian Creek. In order to continue establishing routes you humped large loads up the steep talus to have the necessities for your family.  Your daughter even took her first steps there!  How do these memories influence the way you feel about Indian Creek today?

“It was a lot of work, but considering what Indian Creek meant to us, we were going to make it work. Indian Creek was still “out of vogue” back then and was still the “anti-scene.” Although I miss those days, I realize many others are (now) experiencing the amazing climbing that Indian Creek offers.”

Could you give us a snapshot of the day your daughter took her first steps in Indian Creek?

“It was amazing considering how sand and rocks add to the challenge of walking. Just kidding of course, we were very excited especially considering the milestone of walking and how special Indian Creek was to my wife and I.”

Scott on the cover of Climbing Magazine climbing Slice and Dice (5.12) in Indian Creek.

Your climbing heroes are Wolfgang Gullich, Peter Croft and Ron Kauk.  What characteristics about each of these individuals do you respect?

“There are many individuals that I really look up to. Of course, the above mentioned deserve hero status, but I also have incredible respect for Jonny Woodward, Jeff Pederson—and yourself (Nik)of course. Talent obviously is one trait, but more importantly the traits I respect are friendliness, perspective and humility. For example, I have been asked what it was like to climb with Peter Croft and I would reflect on what a great and interesting person that he is and how grateful he is to be able to go climbing.”

You said you could have gotten a pilot’s license from the amount of airtime you logged while projecting Trail of Tears 5.13, often called “…the finest desert crack yet ascended by man.”  At one point, you gave in and allowed Jose Pereyra to climb up to your highpoint.  Watching him climb the line with ease shattered your mental block and you sent on your next attempt.

“Realizing at that moment that I needed to pay my dues to ‘Choke-Enders-Anonymous Jose,’ displayed that ‘Trail’s’ wasn’t as difficult as I built up to be…amazing how our heads get in the way.”

How much does time invested in a line relate to your fondness of a first ascent?

“Trail of Tears is one amazing line and I feel great privilege to have climbed it. In reality however, I wished that I could have done it with less epic-ing.”

There was no guidebook to Indian Creek when you started climbing there.  The only way you knew about a route was by speaking to others who repeated the route.  How did these interactions contribute to the community at the time? Contribute to the climbing itself?

“There was a lot more mystery and sometimes you had to be clever to extract the information from climbers who were reluctant to give it up. Also before the guide book, there were fewer climbers willing to explore beyond The Super Crack Buttress.  We pretty much had the rest of Indian Creek to ourselves.”

As a Co-owner of IME, you log many hours in the shop speaking with climbers about gear and climbing.  If you could answer a question once and forever, what would the question and answer be?

“Have your fingers always been so huge? Yes, but they looked far more out of proportion when I was three—and worst of all, it wasn’t until  around my 13th birthday I could finally pick my nose. Perhaps I should have chosen a career milking cows by hand.”

Scott hanging out at IME across the parking lot from Momentum Millcreek.

You avoided any competition by staying quiet about the routes you wanted to climb.  Are you maintaining your silence about any routes still?

“Yes, however, mostly for areas that are environmentally sensitive. I have no problem directing friends and customers to any of our areas. But, I am reluctant to enter info into guide books and Mountain Project…preferring to let things develop more slowly via word of mouth.

At the base of many routes in Indian Creek there are sandstone plaques (small piece of talus/flagstone placed at the base of climbs pre-guide book).  Can you tell us why they came about?

“A very classic Hong route named Battle of The Bulge had an anchor on a ledge that wasn’t visible from the ground. A climber who later saw the line, not knowing it had been climbed, put in two bolts and a new anchor half way up and scarred the route forever. The plaque seemed like a good way to indicate a route was there as well as citing the name and grade.”

What advice do you have for SLC’s aspiring climbers?

“Have fun and be safe. Chase stars(quality) before difficulty. If you are getting frustrated and starting to not have fun, change things up.”

Why do you love Momentum?

“Jeff Pedersen (Momentum Co-founder), aside from being one of the best climbers of the1990’s, has an incredible sense of inclusion and community. I believe that this is his primary goal for Momentum. The programs they have incorporated and his staff who run them are equally committed.

As for IME, it’s been fun to watch the tribe of climbers grow. Momentum provides the access to climbing that allows more individuals to experience what we love. Additionally, no one is more psyched than a new climber and who knows where their psych will take them.”