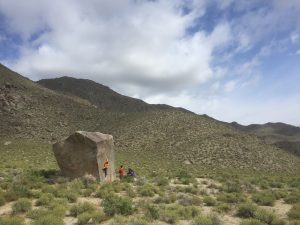 Trip Report: Back to Bishop

My partner Nik and I were 4 pitches from the top of El Cap, crammed together at an exposed belay below the final hard pitch of the new free route we’ve been working to establish. It was the end of our fall season, and the last day we had to work on the one pitch we hadn’t figured out. I popped on my painfully tight shoes and climbed up to the bizarre crux: a sloper-downclimb to sideways dyno. I beared-down on the sloper like I wasn’t tied in, and blindly lowered my foot towards the pathetic foot nub. The moment I even began to think about going for the next hold, I was off. Many tries later I still hadn’t linked the sequence—that concluded our 2016 season.

Above, a crux sequence high on NNL

This past winter, I finally committed to starting a real training routine. In years past I’ve spent my off-seasons bouldering in the gym, but with the big El Cap project on the books for 2017, I knew I had to take things to the next level. I have long been one of those people who climbed as training, and I was excited to see what my body could do if I gave myself every advantage. I hired my friend Ian Nielson to teach me some basic exercises and put a program together for me. He prescribed a simple routine of lifts to target my major strength imbalances, and general fitness. Deadlifts, rows, and weighted pull-ups presented familiar stresses to my musculature, while bench presses, squats, and sit-ups exposed major weaknesses.

I enjoyed the workouts from the get-go. The fatigue I would feel afterwards was different than normal climbing tiredness, and it felt good to work some of my neglected muscle groups. I began to feel more well-rounded in my climbing strength, and even some aches and pains I had began to go away. Sticking with a training routine can be tough, and it really has to be made a priority. For me it helps to keep a goal, or specific outdoor project in mind. As winter turned to spring, I started to feel the call of the great outdoors, and spending time inside became harder. After two months on my program I was excited to get back to the rocks. I packed up my van and headed towards Bishop. With my projects in Yosemite on hold, the eastside seemed like a perfect destination for some “spring training.” Plus, I could go skiing, and paragliding on rest days!

With some recently established routes I had my eyes on, I focused in on Pine Creek. Home to such classics as Pratt’s Crack 5.9 and Ecstasy 5.13a, Pine Creek is one of the premier granite cragging destinations in the US. During my trip I had some great days up at Pine Creek; I onsighted some 5.13a’s, and was able to make the second ascent of Ben Ditto’s fabulous new arête “Mule Skinner” 5.13d. I was definitely feeling on my game.

Climbing at the Gecko Wall, with snow and avalanche debris below

I also spent a few sessions trying a beastly pitch recently freed by Ethan Pringle. “Everything is Karate” 5.14+ follows an overhanging seam through some desperate terrain. On the first session, I was delighted to figure out all the individual sequences. The route features two sustained chapters split by a good rest. The moves are the perfect marriage of tech and power, and you have to drop the hammer as soon as your feet leave the ground. After a few mornings on the route, I knew it was one I would have to come back for, but it was super fun to climb on.

On one of the final days of my trip I tagged along with a group of friends to the Owens River Gorge. It was my first day ever climbing in the ORG, and I had my heart set on trying another one of Ethan’s recent dispatches. “Peter’s Piece of Cake” 13d/14a was equipped a while back by Peter Croft, but it remained a closed project until Peter cut the red tape for Ethan this spring. The route climbs out the biggest and baddest overhang of the Eldorado Roof. On my first attempt I figured out a shaky, but plausible sequence. The route climbs like a real roof crack, with hand jams, finger locks, and even a big move off a fist jam—definitely my style. On my second go, I was surprised to find myself at the lip, pumped into the fourth dimension, stabbing at the finishing holds. I fell. I was happy to have gotten as far as I did. I was tired for my third go, and I slipped off the middle of the roof. I excitedly told Ethan I almost sent the route. He replied “You’re getting that bomber kneebar at the lip right?” My heart sank, in an instant I was able to picture exactly where the right kneebar would have gone. I was even wearing a right knee pad! It was a good lesson in the importance of taking time to figure out good beta.

I was meant to be leaving the next day, but my friend and Eddie Bauer teammate Katie Lambert graciously offered to belay me on the route after a rest day. With the highs predicted to reach the mid-90s, we got an early start. After some warmup pitches, I was nervously tying in below the roof. My body has an automatic response to redpoint stress—I begin to yawn a lot, and get cold and sweaty. Katie and I laughed about this, and how our subconscious minds are often trying to sabotage our climbing efforts. I climbed through the roof feeling pretty good, but also aware that one small foot slip would send me flying. I got to the lip and fired in the right kneebar. From a stable and restful knee, I was able to lever all the way up to the glory hand jam. That’s a wrap!

I headed home to SLC to get back on the training grind. I had a good trip, and felt strong, but the real test will be this fall, when Nik Berry and I return to our project on El Cap. For now, it’s all about Momentum sessions, and cool, shady pitches in the mountains.