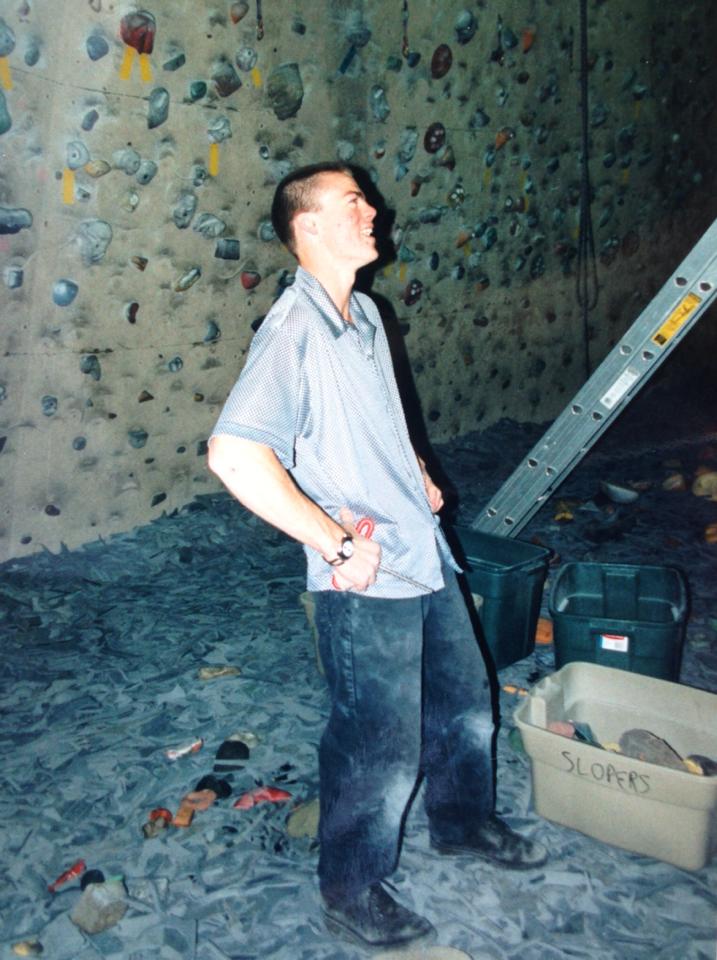 If you’ve climbed around Salt Lake in the last quarter century, it’s likely you know or at least have heard of Steven Jeffery–if not by name, you may know is initials, ‘SJ.’ Steven has developed many of the hardest boulder problems in the region and has been a setter for climbing gyms for over two decades. Since his first job setting at Rockreation at age 15, Steven has been making a living out of envisioning and creating climbs that move us. He was around when setting began with dirtbags trading routes for gym passes, but now he is psyched to see setting developing as a real profession.

Steven describes early routesetting as more of an “underground handshake” when gyms started to pop in the 90s. Basically glorified home walls, these gyms were often littered with holds, and identifying different sequences often required passing beta passed by word of mouth. As larger gyms became more prevalent, the need for route setters was recognized, but it was still far from the world of setting we see today.

“There was no real profession for route setting back then. There were just people that wanted to climb in the gym and couldn’t afford to pay for it,” recalls Steven, “so they would just make deals to trade some routes for gym access. Typically they were people in the community that climbed outside a lot.”

Steven remembers primarily setting for himself in the early years, but as the indoor climbing industry grew, more gyms wanted to operate as a legitimate businesses. This meant that setters had to cater to varied ability levels, and providing easier routes with better markings became paramount. With this professional shift, the quality of setting started to become a selling point for gyms and who was setting became even more important.

“People started realizing what good route setting was and bad route setting was… Just like star [ratings] on outside routes, indoor routes can be better or worse. Gyms started recognizing that and started seeking out experienced route setters. They started paying them decently enough to live out of a van and climb,” says Steven.

Steven, still holding a wrench, while setting at the Wasatch Front Rock Gym in the 90s.

Since climbing experienced a boom in popularity and gyms started popping up all over the nation, the profession of route setting has drastically changed. Many head setters can make a living by doing what they love, and don’t have to live in their van eating mac ‘n’ cheese to do it.

“For me, it’s like winning the lottery. I was a dirtbag climber, but now I can actually make a real living doing what I always wanted to do,” says Steven. “The way setting is evolving is really nice because now I can eat food, go on trips and have insurance.”

Good route setting has become such a commodity that when large gyms have grand openings, they will often bring in guest setters to ensure they open with the best possible routes. Steven, who has helped set for several of these grand openings, flew to Spain last year to help set for Sharma Climbing and just finished setting for the Portland Boulder Rally. Though Steven enjoys traveling and setting on new walls, he says he still always enjoys setting at home the most.

“Setting here at Momentum is the best because I am just setting for my friends,” says Steven. “Old friends I have had for 30 years and new friends I just met in the gym. I am creating what they want and setting for them.”

Climbing has been thrust into the limelight in recent year and this puts route setting in the front and center. Here is Steven being interviewed about setting for the Psicocomp event in Park City.

Most setters, including Steven, would prefer to only set, but as the Director of Route Setting, Steven and other setters are doing a lot more than just putting holds on the wall . In this leadership role, Steven is in charge of payrolls, budgets, time cards, and teaching. He says his most important role is passing on his knowledge and experience to others, while allowing them to maintain their own personal setting style.

“The hardest part about managing a setting crew is that everyone has their own style. You have to help their style develop,” says Steven. “However, I don’t want to just turn them into me because then every route would be the same. The real challenge is making someone’s own style work for commercial setting.”

Steven sets with the Momentum setting crew for the Lehi opening.

“You can’t teach someone to paint a perfect landscape in a couple hours and then turn around and expect them to make up their own over and over without copying what you did,” says Steven. “It is hard to teach someone to make something that can be interpreted easily, but that still looks unique. Anyone can paint an apple sitting on a table with a shadow, but it looks the same as any painted apple. A good setter knows how to make it unique, but is make sure it is still interpreted as an apple.”

With the 2020 Olympics on the horizon and the climbing gym industry booming, it is likely climbing and climbing gyms will only increase in popularity. Steven says this will bring a variety of challenges and benefits, but ultimately he believes it will further the sport and his profession. Steven views the recent growth in the sport as necessary for tapping into larger talent pools, and is excited about what it means for the next generation of climbers and professional setters.