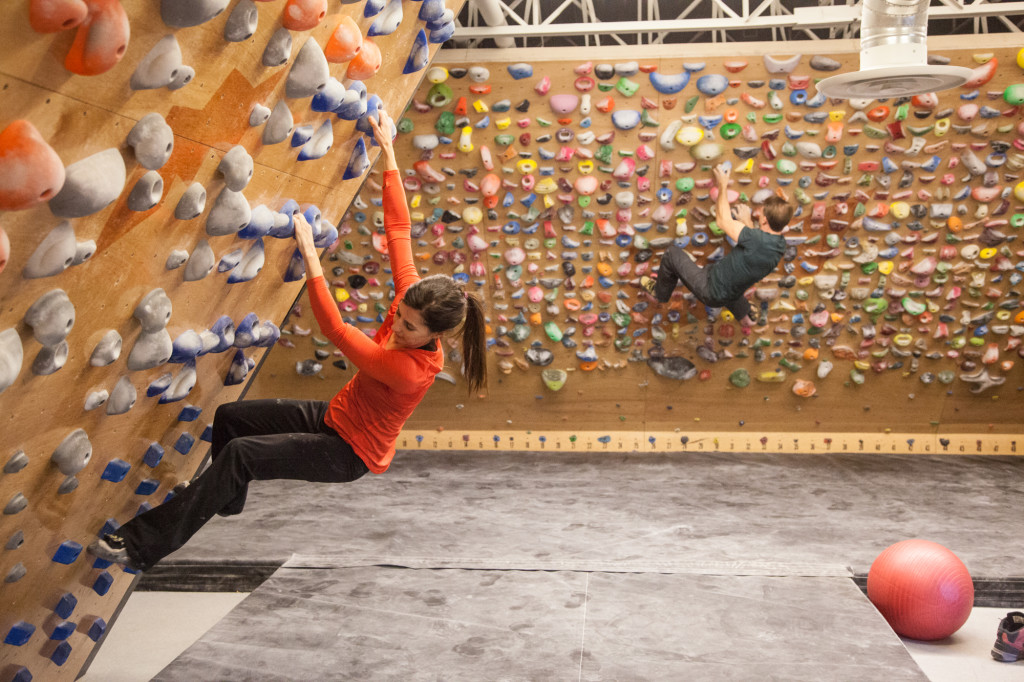 Shanna and Rob Train Up

It was one crazy May day for Rob and Shanna. Two nights before, the two had driven the five hours in Shanna’s Xterra from Salt Lake to the Welcome Springs area outside of Saint George, UT. The two started at 7am and Shanna gave three burns to her project, The Cross (5.13c), at the Wailing Wall before the couple reversed the 30 minute approach back to the car and drove to Maple Canyon so Rob could get a single burn on his project. Three and half hours later, Rob and Shanna did the 20 minute approach to the Pipedream where Rob roped up for a redpoint attempt on T-Rex (5.14a).

They spent the night sleeping in the Xterra amidst the world class cobble cliffs, something they had done at many a cliff on many a night. Commitment was never lacking in the weekend warrior couple. They only missed 6 weekends of climbing in 2014, but both felt something more was needed to make gains at this point in their climbing careers.

Despite both being in their 40s, this past season has been Rob Otto’s and Shanna Ryan’s best season of climbing. Rob completed T-Rex (14a), a project from the previous season, in only three tries and followed it up with a new high grade of 5.14b with Devine Fury. Shanna completed her first 5.13c with a redpoint of The Great Feast and followed it up with Don’t Mess with Texas (5.13c), also both found in the Pipedream.

“I had to change my expectations to the fact that I can keep progressing in my 40s,” said Rob. “I never expected to do 5.14, but through Shanna’s encouragement I did my first one at 41. Now with some focused training, I did my second 14a and now a 14b just before turning 45. I am not sure if I can go much beyond that but if I find a climb I like and can train for it then who knows.”

Rob warms up to train on the woody while Shanna does the same on the system wall.

The turning point turned out to be a focus on training. Each of them has been climbing for more than 20 years, but as would be expected, they hadn’t seen the same gains they experienced early on. Shanna in particular was frustrated by a long plateau that she couldn’t seem to push through and Rob had some projects that he was unable to finish the season before.

“Deep down I was really annoyed that I was not improving and had been on the same plateau for four years,” said Shanna. “The motivation was high to try something different, but not something really crazy like quitting our jobs, selling the house and climbing full-time. We were not quite ready for that …… yet.”

Though the two had been climbing for years and were already climbing at a particularly high level, neither of them had committed to any “real” training. They spent their spring, summer and fall outside climbing on projects with three months spent inside at the Momentum in Sandy in the winter. They would climb plastic routes, do some bouldering and occasionally lift, but when March rolled around it was back to the great outdoors; unfortunately, no gains were seen with this routine. Since the addition of Momentum Millcreek and Shanna taking charge of their training, things have been different.

Rob Otto inadvertently shows off his Popeye arms as he describes the days workout.

“This year, we decided to do something different and created a program with year-round indoor training to complement our outdoor weekend warrior schedule,” explained Shanna. “We live close to Momentum Millcreek, which made it easy to keep an indoor training schedule with outdoor days on Saturday and Sunday.”

Shanna, the self-described “militant” of the two, had decided that enough was enough and created a program for both Rob and herself. She reached out to the likes of Steve Bechtel, Momentum trainer Steve Maisch and Doug Hunter, the author of “The Self-Coached Climber.” She also did a lot of reading, including the popular Anderson Brothers book, “The Rock Climber’s Training Manual.” With help and advice from these climbers and others, Shanna analyzed why she and Rob were failing and what weakness each could improve upon.

“We never really trained with a plan and strategy before, but the last year has been different. We live 6 blocks from Millcreek and this is why we are able to train the way we do,” said Shanna. “I do a majority of the research to understand why we are doing what we are doing. I dig pretty deep into the climbing training literature that is available, and also spend time reading weightlifting, MMA, boxing and gymnastics training philosophies. Millcreek has allowed us to follow our program. It’s great to have all these resources right here.”

Shanna on The Great Feast (5.13c) in The Pipedream. Photo credit No Rest Day Productions.

They refer to their program as a “weekend warrior special” which consists of two days a week of climbing on the weekends with two training days during the week on Tuesday and Thursday. In the hot months of July and August they only climbed one day a week with more of a focus on lifting and training.

Rob on Divine Fury (5.14b) in The Pipedream. Photo credit No Rest Day Productions.

“We train both outdoors and indoors and I developed a plan that cycles between strength, power and sending months. We spend time on movement skills, weightlifting, limit bouldering, system drills and hangboarding,” explained Shanna. “Honestly, it was really tough to stay committed. During our power phase, our outdoor performance suffered due to a lack of recovery. Plus we were adding in a lot of weight lifting, which we all know is not super sport specific.”

The two are at a point, after 20 years of climbing, where making significant gains requires less time working on movement specific skills. They both agree, however, that a focus on learning how to move efficiently and fluidly is a critical part of improving and climbing to your potential While the two miss out on some of the climbing they love, their new schedule allows them to hone in on their specific weaknesses and focus on project specific movements and strengths.

While both Rob and Shanna train strength with hangs in the training are, the two have selected different hold types to improve upon weaknesses or prepare for specific goals.

The training deck at Momentum allows the two to train together while letting each of them focus on their drastically different weaknesses and goals. Shanna can focus on power drills and use the weight room while Robert, with his “Popeye” arms and corresponding strength, can focus on core and technical skills on the woody in the same space. Despite this discrepancy in strengths, the two are able to find a balance between their different goals and training plans.

“There are pluses to being married to your main climbing partner. We are both dedicated and support each other’s goals and plans so we will split days, weekends and seasons so we both can accomplish what we want,” said Shanna. “If you train together, you have to understand how men and women have different strengths. For example, in weight lifting, it is important to scale exercises according to gender. For example a 2X deadlift is great for a female, but for a man who lifts weights, it is an achievable goal or with pull-ups, most men can do a few reps easily, but (some) women have to work really hard to achieved sets of 10 reps and might not be able to do 1 rep initially.

Both Rob and Shanna are continuing to train at Momentum Millcreek for the upcoming season where both plan to climb some outside of Maple Canyon in hopes of sending at their limit on various rock types. Chances are you will see them getting after it on the training deck as Shanna prepares to go back to the Wailing Wall in hopes of redpointing The Cross (5.13c) and Rob prepares for a variety of 5.14s in American Fork and at the VRG.