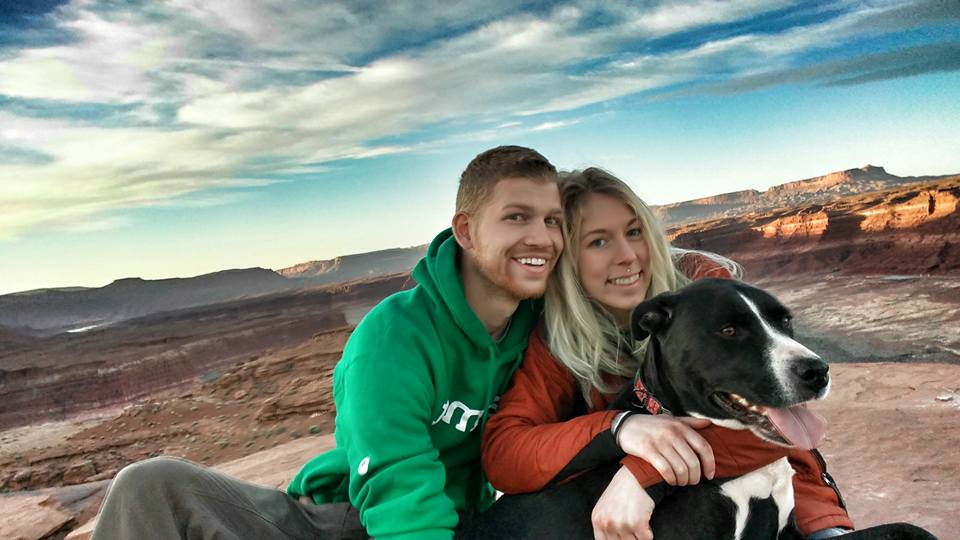 Pairs Who Are Pushing It!

Rob and Shanna have been living and climbing in the Salt Lake area since the turn of the century. A true climber couple, they met at Rockreation and began dating in 2003. Shanna recalls their long history of climbing at Momentum, “I believe we were the first couple to get a membership at the Sandy gym when it opened.” Robert chuckles, “yeah, I think we were around the 5th and 6th members.

Though they both started as trad climbers, they are primarily sport climbers these days. They focus hard on training and projecting routes. Married now, they live just 6 blocks from Momentum Millcreek.

“Because of our work schedules, we do a lot of training together,” Shanna says. Projecting is a group effort for this power couple, and they work hard to allot time for their respective goals. “Some weeks we focus more on Robert’s projects while I’m training, and then we’ll go into a cycle where we focus more on my goals” Shanna explains. “We learned pretty early on that it was really important to use our climbing time smartly.”

This commitment to each others’ projects has made for some pretty audacious days of climbing. One day they started off climbing on Rob’s project in American Fork, and then drove to Maple Canyon so Shanna could try her project in the afternoon. “It gets crazier,” Shanna says, “two years ago, I gave 3 burns on my project on the Wailing Wall in the morning (near St. George), and then we finished the day with Rob trying his project at the Pipedream Cave in Maple!”

While they claim these are extreme examples, this calculated division of time is key to their climbing being productive and fun. Shanna, who is just getting over a hand injury, has been primarily weight training and is starting to ease back into projecting. She is currently working on a route at Logan’s Hardware Wall. Rob has been putting effort into the legendary Big-G at Hell Cave. Training is very important to Rob and Shanna, as they both have careers, but still want to improve at climbing.

As “weekend warriors” they train hard to climb their absolute best on their respective projects. Meticulous planning is the key to their success. What’s next for these crushers? Red River Gorge this fall, and they would love to make it back to Spain in the near future.

Hailing from Colorado and Nevada respectively, Tom and Sam have called SLC home for several years now. True all-arounders, you’ll find them bouldering in Joe’s Valley one day, and adventure climbing in the Ruby Mountains the next.

They met one day in Nevada’s Lamoille Canyon;; Tom mentioned he was a climber, and Sam, eager to do more climbing “instantly volunteered to be his belay slave.” Tom, who grew up climbing around Fort Collins with his dad, fell in love with the Utah Desert (especially Indian Creek) while he attended college in Durango, CO. He is now a bona-fide connoisseur of desert obscurities.

Since Tom introduced her to crack climbing, Sam has also caught the crack bug. “He hasn’t been able to get rid of me since!” Sam recalls. Recently Tom and Sam went on a massive road trip: “we took the summer off and traveled around the west; visiting Maple, Indian Creek, Smith Rock, French’s Dome, Teton River, Index, and Squamish. Hands down the highlight of my climbing experience thus far!”

Between their busy work schedules, Tom and Sam cook up cool climbing adventures whenever they can, like floating the Green River’s Labyrinth Canyon, and climbing first ascents on the walls above the river. When work doesn’t allow them to go on trips, they enjoy climbing in the SLC area.

Beyond climbing, you’ll find them backcountry skiing, floating gnarly rivers, and getting after it in all the amazing outdoor sports Utah has to offer. For Tom and Sam, training in the gym is a staple for their climbing lives, and an easy way to squeeze in some pitches before or after work. Sam reflects on future trip ideas,  “I dream of going to Norway and climbing in the Lofoten Islands. Tom is the perfect partner to attempt some big objectives in the unknown with.”

Momentum’s resident offwidth/crack climbing duo, Danny and Ashley can often be found running laps on Momentum Sandy’s overhanging offwidth, or on their crack bouldering circuit in Little Cottonwood Canyon. Both from the SLC area, they grew up in families that valued spending time in the outdoors, but didn’t start climbing until 5 years ago.

“My first time climbing was at Pete’s Rock, with my dad giving me a hip belay,” Danny says. Ashley mostly bouldered and sport climbed for the first few years of her climbing. They met when Danny was looking for a partner to go climb some desert cracks. Danny recalls “Our first climb together was the Crackhouse.” Ashley laughs, “yeah, at first we were just angry climbing partners.”

They continued climbing cracks and offwidths together, and they have each racked up an impressive tick-list of routes across the western US. “Ashley progressed really fast,” Danny says, “she sent Trench Warfare after only 6 months of climbing cracks.” This past year, Ashley went on to make the first ascent (her first FA) of Wapiti Crack, a savage offwidth in southern Utah’s North Wash.

Danny is no slouch either. He recently made an ascent of the legendary Zion offwidth, Gabriel 5.13c. Danny’s was the first all gear ascent of the route, which required him to carry an enormous rack, including five Valley Giant #9 cams.  Aside from projecting hard routes, they also do a lot of exploring together. “It’s less about the climbing, and more about getting out together,” Danny says of their shared passion for the rocks. This fall they plan on exploring around southern Utah, always on the lookout for the next grueling vertical adventure.