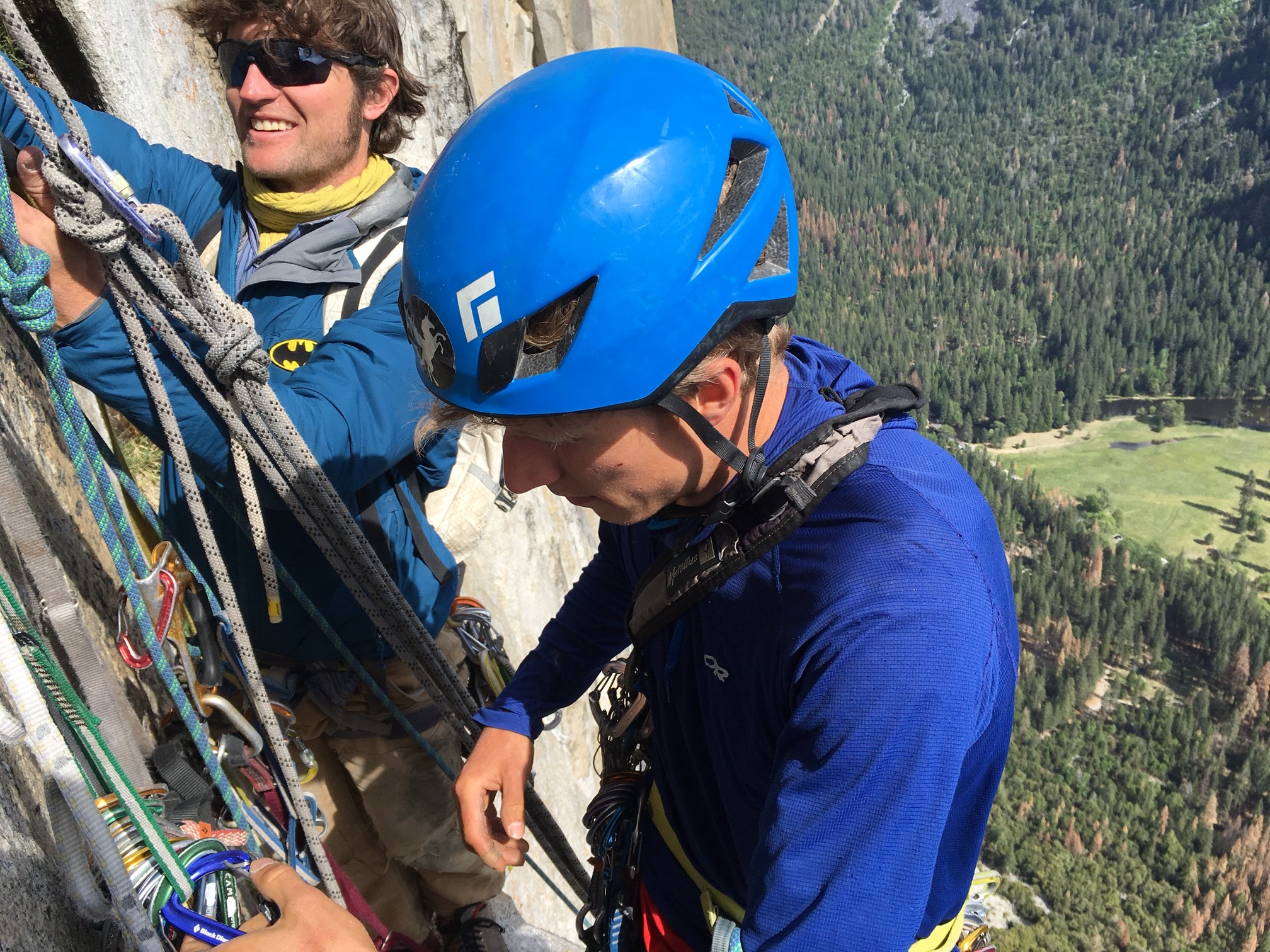 I was infatuated with Yosemite and El Capitan before I even started climbing. Rocks and cliffs just appealed to me, and the thought of a cliff over half a mile tall was mind-boggling. I first climbed El Cap when I was 18, and it stuck out as the most powerful event in my life. I had never encountered something that required me to dig so deep, on such a mind blowing stage. Ten years later, El Cap hasn’t gotten any smaller, or easier, but it serves up an ass-whooping that keeps me coming back every year.

In the spring of 2016, Nik Berry and I met up in El Cap meadow. I had just rolled into the valley, and was keen to dive headfirst into a big project. While working on freeing the Heart route in the years before, I would often stare at the left side of El Cap, trying to imagine a free route. The area around Aquarian Wall/Never Never Land seemed to have some promising features, so Nik and I decided to head up to the bottom pitches of Aquarian Wall to see if there were any holds. We put our noses to the grindstone and slowly unlocked the many hard pitches. Our first challenge was to navigate a way through the Great Slab to Timbuktu Tower (8 pitches up). It took us days to figure out this part of the route, but we eventually found an amazing two-pitch dyke traverse that got us past the first giant blank section. Harder climbing still guarded Timbuktu, but it would likely be possible.

Nik Berry racks up for another sustained aid lead on our recon mission up NNL, while Niels checks the rigging.

We had fixed ropes up to Timbuktu, spending our days on the wall and retreating to the ground tired every day. Above Timbuktu was a fork in the road–we could either continue on Aquarian Wall (Bridwell, Schmitz ’71) or branch off on to Never Never Land (Chapman, Hawkins ’78). Never Never land ultimately seemed to speak to us. We decided to do a full, ground-up recon of the rest of the route, so Nik and I, along with our friend Niels who had joined us in our efforts, decided to climb NNL in a day from Timbuktu Tower. It was a long day, but each pitch looked plausible. While two people lead and cleaned the pitches, the odd one out would jug a free-hanging line to swing around and assess the free climbing possibilities. We topped out at 2am, dead to the world, but feeling like kings: we had found a new free route on El Cap… maybe.

Following the 5.13b dyke pitch. This pitch was one of the keys to unlocking the upper part of the route.

Finding our line has continued to be a huge challenge. There have been many moments when it seemed the route might not go, but it has been magical to see the free climbing reveal itself. This past fall, Nik and I left Yosemite having done all but a couple moves of the route, and optimistic about an entirely free line. We laughed about how the route seemed to get harder everyday- “Well here’s another 13+ pitch,” is a phrase we uttered more than once. The final challenging pitch of the route sits just 3 pitches from the top, where our free line will leave NNL, and finish on the final pitches of Aquarian wall. At first glance, the terrain seemed ripe with features, so we figured it wouldn’t be terribly hard. As it turns out, there are two different traverse options: Option A, the 40 foot 5.14- razorblade slab traverse, and option B, the sloper downclimb to sideways dyno. We spent a few days on these pitches, and came to the following conclusions– Nik thought the slab traverse seemed more doable, and I felt like the down-dyno was the way to go. We continued trying our respective variations, and it turns out they are both very difficult.

With the American west deep into a proper winter, I am now turning my focus on to preparing for the next round with Never Never Land. I am beginning to realize that if I want any reasonable chance of climbing this route, I need to be stronger. I have never made it through a proper training cycle, but I am excited to put together a program that will address the specific areas of strength that NNL will demand of me. With Momentum Millcreek only 10 minutes from my house, I’ll have no excuses come springtime.