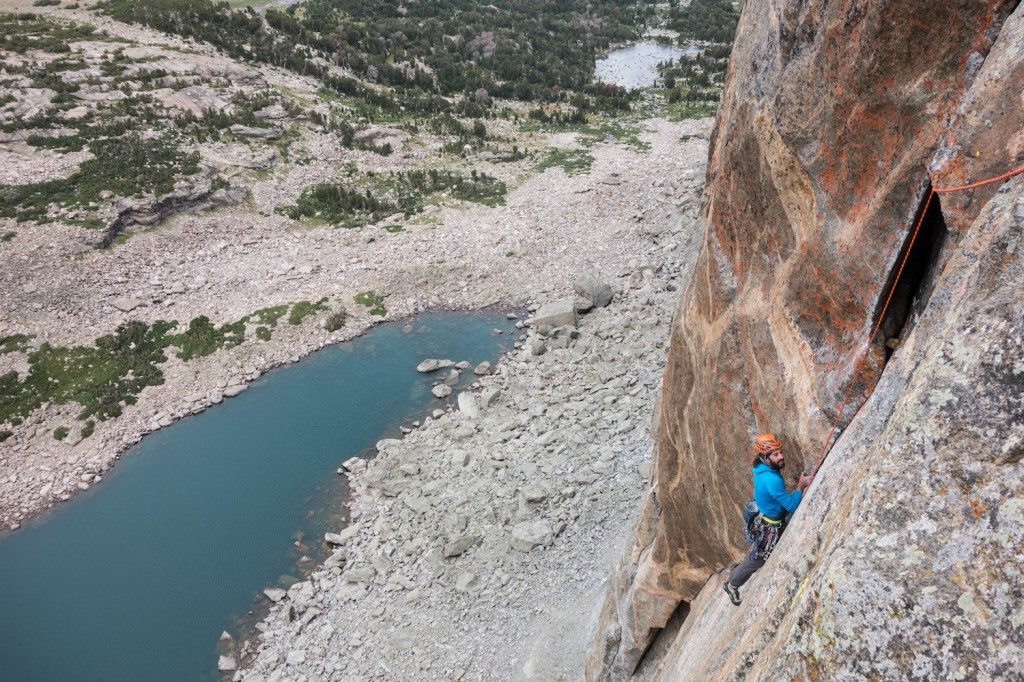 Between studying, I dreamed of climbing.  I stared at Instagram pictures of  thin alpine cracks.  I remembered an August trip to Mount Hooker four years ago.   Seven inches of snow and frigid temps kept us on the super chossy, but sunny, Red Light District.  The rock on the right side of Hooker looked amazing, but cold.

I couldn’t remember what the Salmeterol prevented but I passed the pharmacology class, the hardest class in the hardest semester of nursing school.  I felt liberated.  School would easier from this point on.

Instead of dreading the next day of cramming,  I packed two weeks in the Wind River Range, camping at the base of an incredible 2,000 foot wall with my friends Mason Earl and Dave Allfrey.  We prepped for the trip with food, equipment, and our vices. We stocked up at Walmart, Costco and Trader Joes; cruised by the Black Diamond headquarters and stopped at a Wyoming liquor store for whiskey and scotch.

Three horses carried 450 pounds of our supplies through an early August thunder storm to our campsite. We traveled through 3 passes, 5 meadows, past countless lakes, and ended up 20 miles from our car.

After we dropped our gear, we stared at the wall through binoculars.  A slope of talus guarded Hooker and below that sat an alpine lake.  On the other side of the lake was more talus and a perfect view of the steep formation.  Our goal was to climb the steepest, blankest most beautiful route.  We wanted the king line!

That’s when we realized we had forgotten to bring a topo.

The hiking destroyed our bodies but we woke the next morning psyched.  We hiked to the base of the cliff.  Mason and I stared at the first pitch.  Rotten, loose blocks marked the start.  I lost in a game of rock, paper, scissor.  The hollow rock bonged when I hit it.  I climbed high above a small cam on 5.10 face climbing.  I reached a ledge, scared.  Mason followed and then set off on the more difficult, but better rock above.  Mason placed difficult gear and sent the 5.12 pitch.  It was a commendable lead.

The sky darkened with ominous clouds as Mason built the anchor.  We retreated  to a cave on the approach trail.  The storm lasted for an hour.  Then the sky cleared and the rock dried.  We convinced Dave he had to lead the next pitch.  He was not psyched to leave the comforts of the cave.  We’d been indulging in the vices.  We jummared to the top of the second pitch.  Dave nailed, hooked, and equalized beaks on the next pitch.  “Watch me, “ he said.  I was happy to be belaying and not leading as Dave made his way up the pitch.

We were satisfied with our progress for the day and headed back to camp.  The second day began with a slowly thinning corner.  Lichen caked onto the rock.  My feet felt slick, but I tried to trust them.

“It’s 5.11c.” Dave said.  Dave nailed beaks and placed occasional cams in the seam of the next pitch.

My heart sank.  I believed him.

“I’m going to look,” Mason said.  He jummared the pitch and got very excited.  “It will go but at a high grade.”

The next day, we brought the brush and cleaned the slick lichen from the pitch.  After two days, we had done all of the moves, but linking the thin laybacking would be a difficult undertaking.

Mason explored the pitch.  A powerful crux off the belay lead into sustained 5.12 climbing above.  Mason equalized beaks and climbed into difficult territory with marginal gear. He remained calm and confident.  He deadpointed to a flat ledge high above his protection, sending an incredible 5.13a pitch.   With his beta, I managed to flash the pitch.

Perfect weather allowed us to keep climbing. The weather brought me confidence.  I gave the crux pitch a lead attempt.  I climbed relaxed, fluid and felt strong.  The crux went by quickly as I focused on each hold.

Suddenly my body felt out of control. I was falling.  My foot had slipped.  I dropped my head into my hands. “The route was done,” I said.   “I  did all of the hard climbing on the pitch.”

I grabbed my warm down jacket after lowering down the pitch. I hoped the goose feathers would restore my motivation and take away the emptiness I felt inside. Mason tried the pitch.  He made impressive links and inspired me. I was back on lead.  Entering the crux, I placed my foot more precisely on the sloping groove. This time my foot stayed. I felt the euphoric. “Whoo HOOO!” I yelled.  The final moves to the anchor felt easy.  I clipped into the belay and slumped onto the rock.  I could relax. Everything looked prettier.  Everything felt better.  It was one of those moments when all of the hard work seemed worth while.  We had team freed an incredible 8 pitch variation.

Bad weather followed and forced us to rest.  We played games, fished, listened to NPR and enjoyed our vices.

When the weather cleared, we returned to the wall.  Mason sought the euphoric feeling I had.  He climbed with his typical confidence and calmness.  At the crux, his body came out from the wall and then he  hit the end of the rope.  My head dropped.  His did too. He rested and tried three more times with similar results.  His skin resembled cracked glass.  Blood oozed from his tips. He knew that the odds where stacked against him with his skin being so atrocious.

“We are coming back next year to complete the whole aid line,” I said.  “That’s what really counts.”

“Yes,” he said. We rappelled and pulled our ropes in the rain.

We woke early the next morning.  It was time to leave.  Dave had school. Mason needed to see his parents.   I had flash cards to study.  We packed over 80 pounds into our bulging haul bags.  The first few miles went by easily with our spirits from success, but as the hills came so did the pain in our legs.  Our waist belts dug into our hips.  We burst out in painful cries. The moaning momentarily distracted us from the pain.  After the 20 miles we arrived at our cars.

Mason, Dave and I wheezed.  I suddenly remembered what Salmeterol does.  The drug is a bronodiliator.  It relaxes your airways so you can breath better.   Unfortunately, I forgot the Salmeterol at home.  We headed to the Lander bar instead to wash away the pain.