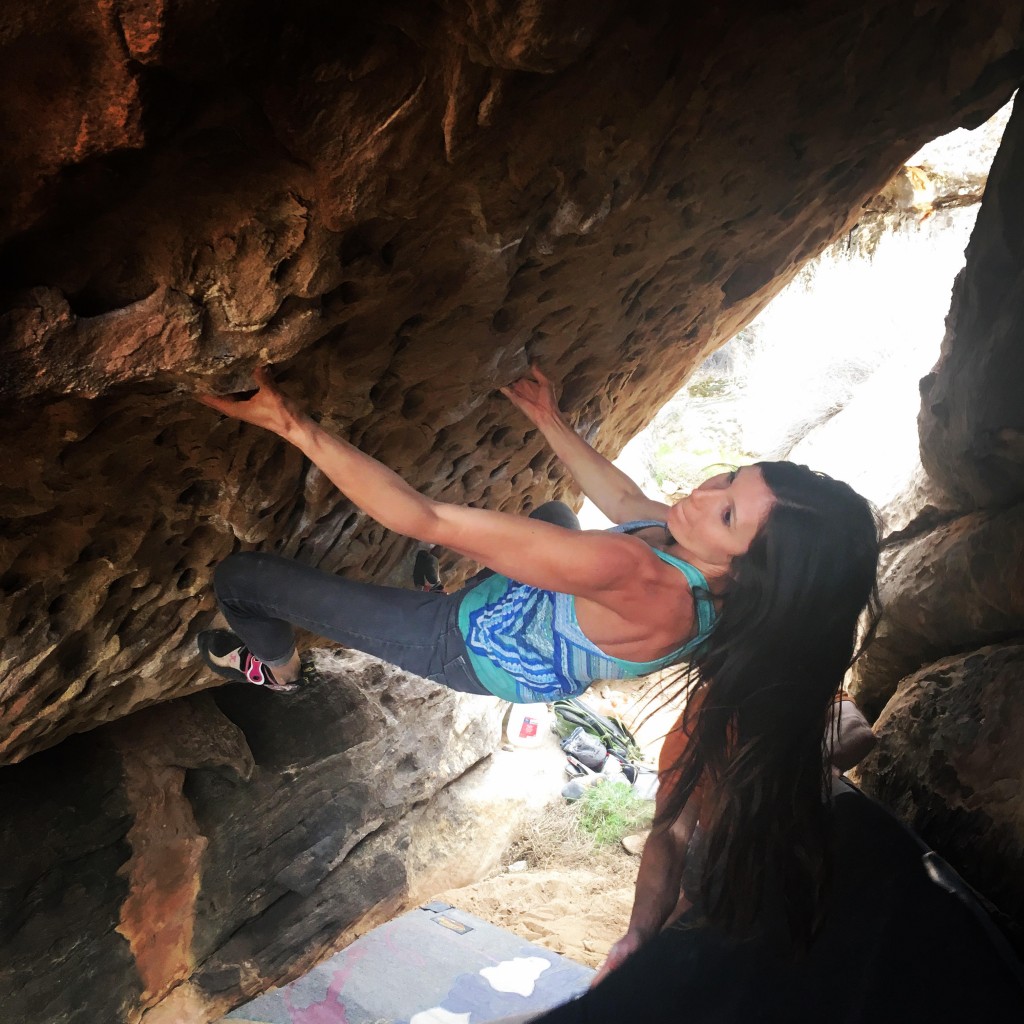 Before I had kids, I had dreams of what my wonderful outdoor family life would be like. I imagined babes in adorable fleeces and hiking boots playing quietly at the scenic and baby-proof crag as my husband and I would joyfully climb route after route while basking in our incredible outdoor parenting skills. We pictured jaunts up to our local peaks with trendy backpacks and organic snacks for our happiest of children.

Well… the reality of parenting isn’t quite what we all expect. As parents, our personal objectives often take a back seat, and the typical crag day can easily be derailed by tired children. The days of peacefully bagging peaks with my husband are often replaced with dredging along with a wiggly and sometimes very unhappy baby on my back and old bruised banana gunk in my hair… or more typically, not with my husband or kids at all.

Despite all the parenting challenges that exist, don’t fret! I had the pleasure of talking with four climbing moms who are making it work. These serious lady crushers gave me some honest perspective on how they have adapted to the balance of raising a family and still making time for their climbing objectives.

Nancy, Momentum’s Controller, is a highly decorated professional climber who started climbing at 13 years old when her family moved to Jackson Hole, WY. It wasn’t long after arriving in Wyoming that climbing became her passion, and as she got a little older, she started spending weekends climbing at the City Of Rocks, ID. She travelled the world with other professional climbers such as Lynn Hill, and is both an accomplished rock climber and alpinist having earned her spot as the 11th American woman to summit Everest. It should be no surprise that she met her husband Jonathon Carpenter during her journeys, and that he too is an avid climber, spending most of his time on alpine ascents.

They now share a son, Connor, who is 11. She has mostly retired from big wall and committing alpine ascents, but still spends most of her free time climbing in the Wasatch and throughout Utah.

DC: How did having children initially impact your climbing?

NF: A week after he was born, I went up and did Satan’s Corner and I tore something in my shoulder. I needed to take 8 weeks off for that––I was initially not planning on taking time off, but it was a good thing.

DC: After coming back from that injury and getting settled into motherhood, how did your climbing evolve?

NF: I just did a bunch of gym climbing.

DC: Having come from big wall climbing and high alpine ascents, how did your risk assessment change and how did that affect the type of climbing you did?

NF: [When considering] all the ice climbing and alpine climbing I’ve done, the desire for that kind of stuff diminished. Once Connor was born, my husband and I had a busy work schedule, [so] I began to gravitate towards sport climbing because I could climb at the gym and stay reasonably fit.

NF: He doesn’t really like to climb. He likes to canyoneer a lot, so we go canyoneering. He loves to ski and we ski. I’ve never pushed––when he’s ready to do it I hope he will.

DC: Do you have any words of wisdom?

NF: I think it’s all about finding the balance, and [that balance is] changing all the time. Sometimes climbing has to take a dip, but it will always come back and it’s always there. Having kids is much more worth the extra days of climbing. It’s okay to take time off.

Lani has been climbing for 17 years. She started climbing at a small gym in Provo, Utah called The Rock Garden. She spent several years exclusively climbing inside as a teenager. After taking a pretty sizeable fall off a cliff at a young age, her parents were not too keen on sending her outside again. She used climbing as a way to get over her fear, and after a period of time of climbing and working at the Rock Garden, the people she worked for called her parents, told them how well she was performing, and asked to take her outside to climb. After that, she fell in love with the granite of Little Cottonwood Canyon and climbed her way through college. Now, she works as a full time computer programmer and has a daughter, Lyra, who is 5 years old with her very supportive partner Bryon Tripoli.

DC: How did having a child change your climbing lifestyle?

LA: I got super motivated about climbing again, because I finally got my body back!

DC: Has the way you evaluate risk in climbing changed?

LA: I don’t do mini-solos anymore! I went through a slightly reckless phase before I had Lyra, really just pushing limits.

DC: Tell me about Lyra and your experience with climbing with her outside?

LA: She’ll boulder up [in LCC] with me. I have a couple of kids problems that I’ve made up for her. She’s usually good for two or three climbs and then kind of done. It’s a really fun environment up there for her; she likes to splash and throw rocks in the river.

DC: So it sounds like your crag experience with your daughter is going really well?

LA: Absolutely, bouldering and sport climbing. We set up swings for her, she climbs for a little bit and then just plays on the swings and she just loves it.

DC: Do you have any advice for any moms or new moms in climbing?

LA: Just go slow. Your body needs time. Know your body and just go with it.

Jacinda started climbing around the age of 18. She spent the next two years climbing with her husband, Mike Hunter. Very soon after she started climbing, she also started having children. She had four children over eight years, and said that for most of her 20’s she was “barefoot and pregnant.” It wasn’t until her oldest was 11 that she and Mike decided to get back into climbing. Since becoming a mother and a nurse, Jacinda has bouldered V11 in Upper Chaos Canyon, Rocky Mountain National Park, and established a First Ascent (not FFA, FA!) of “Fantasy Island,” a 5.14b in American Fork Canyon.

DC: What did it look like when you came back to climbing with your husband?

JH: We didn’t climb together much, because one of us always had to be home. We had a calendar and wrote out our schedules. It was so fragmented when we could get climbing time, but we were both obsessed with it and made it work.

DC: What helped you to climb harder grades with limited time?

JC: I started bouldering and spent a season doing that. Bouldering is a great way to get back into climbing for moms. You don’t need a partner, you can go really quick, for like an hour and a half to two hours and bust out a hard workout.

DC: Do your children climb?

JC: I never want to push my kids to climb. I don’t care what they do, I just want them to find a passion and something that’s active. I just want them to appreciate the outdoors, appreciate an active lifestyle, and be healthy, and just find something they love and just do it. *All her children are very active in different sports, from climbing, skiing, running, and dancing.

DC: What advice do you have for mothers?

JC: We’re too hard on ourselves to get back into shape. I think there’s a time for everything and it’s okay if you can’t climb because you’re immersed in the moment of what’s happening in your life. Climbing will always be there.

Kris started climbing while she was living in Northern Wisconsin and was a sea kayaking guide on Lake Superior. People she worked with were also climbers and took her on her first trip to Ely’s Peak in Duluth, MN and she was instantly hooked. Since having her two children, Benjamin (8) and Momentum climbing team member and Iris (4) with her husband Noah, she has been dedicated to her family’s involvement in the sport and has taken complete advantage of the youth programs offered at Momentum. Not only does this get her children involved through classes, but she is able to get in a lot of climbing time while they are in class or at the daycare offered at Momentum.

DC: How has your climbing lifestyle changed since having children?

KD: We have both cut back a lot. There is just not as much free time and when you go as a family, your expectations change. I had these happy dreams of us all going out to climb together as a family, and it’s great to get your kids outside, but it’s hard to get in as much climbing as you want to.

DC: What does your climbing lifestyle look like now?

KD: I’m mostly climbing at the gym, and I feel very fortunate that there’s Momentum and that there are good route setters and fun stuff to climb. I have fun with what it is.

DC: Any words of wisdom for climbing moms?

KD: Climb at the gym. It’s a great fun and efficient workout and Momentum has daycare. I feel like my kids like climbing and feel comfortable here because my kids have always just come with me.