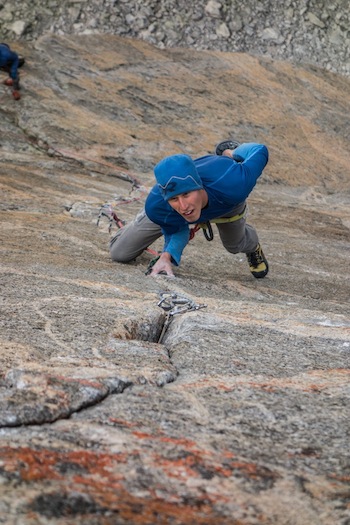 After clipping the chains on a long-term project, you’re flooded with pure joy, contentment and mental freedom. Success in climbing gives climbers incredible feelings; however, successes also show what we are capable of. Once a climber has climbed a certain grade they should be able to climb other routes of the same grade, right? This is why successes lead to expectations. From your success, you feel entitled to others. This leads to putting forth less effort and expecting the same result. Expectations lead to failure.

Two months of winter bouldering in Hueco, I was excited for the Dihedral Wall on El Capitan. I felt strong. While working the first four pitches, my belayer, James texted with his friend and found out Yosemite National Park closed the area for falcons. The closure devastated me. What would I do? The previous fall, James explored an aid line across the Valley. Thinking the route would go free and in need of a lift out of my somber state, James and I aided and cleaned the rock on Fifi Buttress. The granite turned out to be superb with interesting moves. I dreamed of a first ascent of a difficult free route in Yosemite and the route made it a reality. I left Yosemite feeling successful after redpointing the Final Frontier.

Nik Berry on the 5.12d lower on Final Frontier

Nursing school started the first week of May. Climbing well with a stable job in my future, I enjoyed my studies. SLC experienced a sweltering 2013 summer. Too busy to climb outside, I trained, ran and studied all summer. A post summer semester trip to Mt Hooker became my light at the end of the tunnel.

Dave Allfrey, Mason Earle and I established a new 8 pitch variation at 5.14a. The alpine rock was incredible. I achieved another lifetime goal to establish a 5.14 multi-pitch route. Mt. Hooker was a success.

Nik Berry on the 5.14a crux on Sendero Luminoso

Back in school, I returned to my previous schedule of training and studying. Fall break arrived quickly. I drove six hours west toward Yosemite.

“Dude, I just got down from doing The Nose in a day,” Brad said. “The rangers are giving $160 tickets for climbing.” The government shut down dashed my climbing goals. I turned towards limestone in Saint George. I switched dreams from Yosemite to Golden a 5.14b, an amazing limestone sport route. I felt strong and had been climbing well. Final Frontier and Mt. Hooker made me a better technical rock climber. Training in the gym made me stronger. As I drove towards Saint George my confidence grew and so did my expectations.

Over the next 10 days, I one hung Golden three times. My spirits were high. I had time to put into this route and the strength to send.

Back home I trained specifically for the route by setting the crux section on a climbing gym wall. I returned over Thanksgiving but fell repeatedly at sections I had climbed through before. Progress came slowly. The last day I one hung Golden twice in a row. I had to go back to school. The weather got cold and then snow fell in St George. Golden was a failure.

I yearned for more than climbing hard. I wanted to return to Yosemite. Zodiac, a steep sunny route on the right side of El Cap, would be a perfect free climb over Christmas break. I invited Joe Kinder to join me and felt excited to share El Capitan’s beauty with a new big wall climber. After climbing on Golden . I felt strong and had expectations. Since working on a 5.14b, a 5.13d should feel easy. Joe and I tried the upper 5.13c pitch. It climbed well and was fair for the grade. The next days we tried The Nipple 5.13d, the crux pitch in the middle of the wall. We flailed until we found a sequence through the underclings. Years of aid climbers hammering iron into the rock carved out pin scars just big enough for our fingertips. We executed all the moves and made progress. After a rest day, we returned expecting to climb better. No progress was made and we felt discouraged. The following days went similarly. Though we enjoyed hanging out on a portaledge basking in the sun, we hated getting worked on The Nipple pitch day after day.

Over coffee at Degnan’s Deli, we talked about our progress. We were losing our drive. The climbing stopped being fun. We wanted to do other things. We stripped the route and drove home. Yosemite was a failure.

Failing on Zodiac and Golden taught me so much about climbing. When you succeed there is no reason to process what you could have done better since you sent. My failures forced me to dissect my climbing. I need to relax on small feet, climb faster, adjust the force of my grip quickly, and increase my bicep strength. Much of these improvements require more climbing outside. I used to think strength was the limiting factor for climbing harder. Now, I know when you want to break through to a new level increasing one aspect of climbing is not enough. Technique is a large component of rock climbing. Technique is equally if not more important to improve on than power, even though, it is tedious to work on.

To some degree, my failures on Golden and The Zodiac have been successes. They taught me what I need to work on, where I can improve, and lessons I would not have learned if I had sent. As C.S. Lewis wrote, “Failures are fingerposts on the way to achievement.”