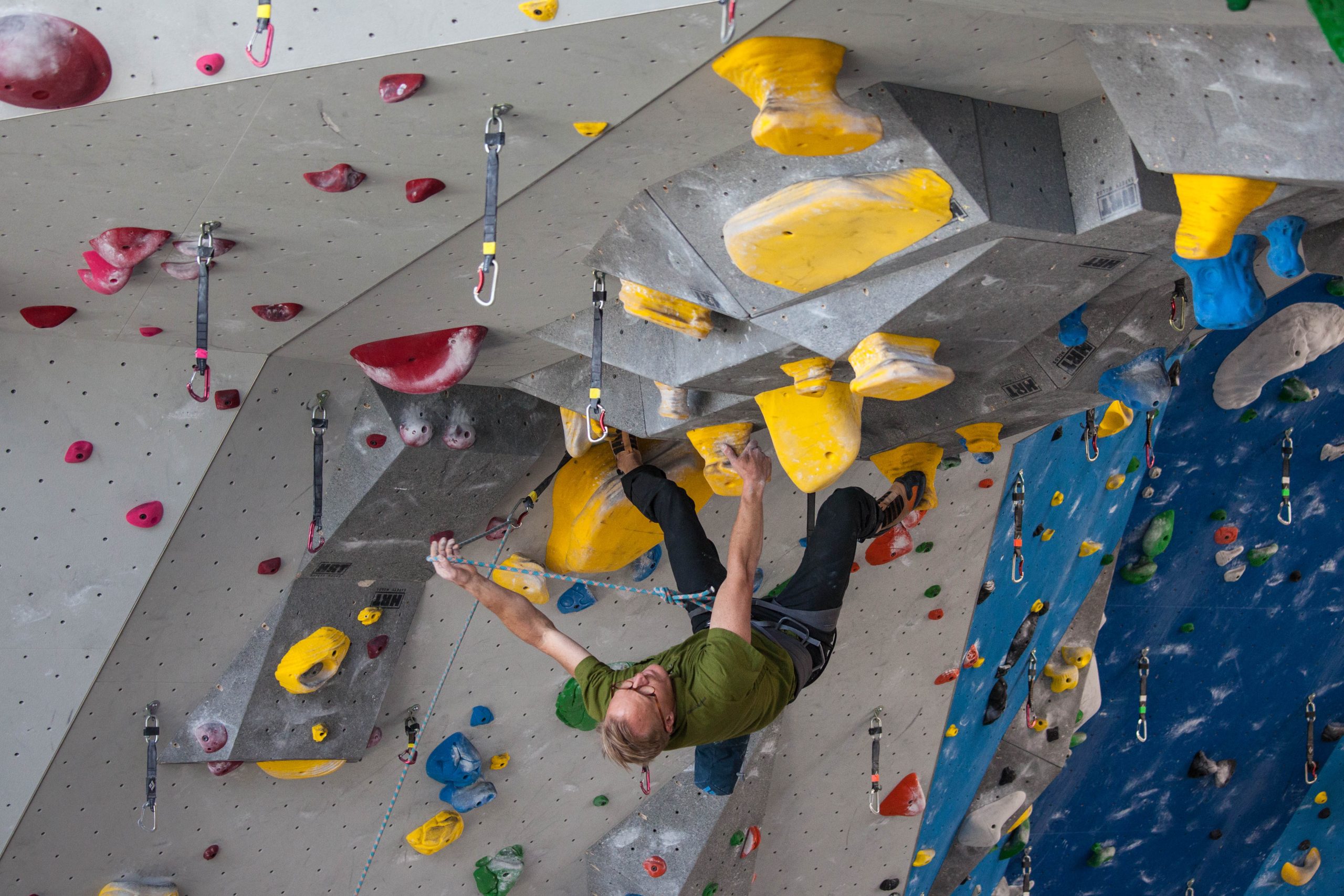 Any attempt to research volumes will prove they are one of the most elusive, yet ubiquitous, pieces of indoor climbing related equipment. With their sheer size and geometric considerations, the underrated yet pervasive volume has the ability to resculpt climbing walls with every new setting. Volumes grant static climbing walls adaptability by constantly morphing their shape, size, and angle. However, despite the extensive possibilities volumes grant a gym, there is a distinct lack of published history on their creation and use.

Architecturally, a volume refers to the 3 dimensional space an object occupies. Matt Samet’s Climbing Dictionary describes the climbing volume as a “large, convex, hollow feature attached to a gym wall that contains threaded inserts to bolt other holds onto.” The first accredited company to market artificial climbing holds was the French company Entre Prises (EP). Mark Jackson, a designer at EP, remembers European wall companies creating 3 dimensional add-ons from wood and fiberglass in the late 1980s. Pako Kostas at HRT, another European hold company, expands upon the history of volumes saying he first recollects seeing ‘inset type’ holds which were mounted onto walls like volumes are mounted today. The creation of these ‘bigger holds’ coincides with the material shift from concrete to much lighter and user friendly glass reinforced plastic (GRP).

Pictured on the left are wooden add-on holds in their infancy. Kostas at HRT is the mastermind behind creating 4-5 piece sets of GRP holds that are so large they are considered by HRT to be volumes. These large cohesive sets blur the line between the definitions of volume and hold.

EP began designing and selling volumes in France in the late 1980s, and they made their debut in America in the early 1990s. With the advent of competition climbing (born in our very own backyard – Snowbird, UT), Ty Foose, designer at eGrips, recalls seeing his first EP volumes in the same era. Foose expanded on EP’s prototypes, and created what he deemed ‘Piggybacks.’ Foose’s volumes had the added feature of accommodating both screw-on and bolt-on climbing holds. Today, volumes are made of GRP, plywood, or polyester and polyurethane resin (the same material used for holds). The shape of volumes has also expanded from their geometric beginnings to volumes that pay homage to tufas and cracks.

Jimmy A Keithley climbs on clustered and stacked HRT volumes in Momentum Millcreek’s archway. Head Setter Steven Jeffrey does not specifically recollect when volumes began to be stacked, but rather sees it as a natural progression once gyms acquired more volumes.

Now there are companies like Jared Stains’ Motavation Volumes; with the visionary specialty of solely creating volumes. At first working out of his father’s garage with only a table saw, Stains expanded upon his predecessor’s products that he saw began to warp and degrade over time. As such, he began to use high grade Russian Birch to provide long lasting framing for his volumes, 50/52 aircraft grade aluminum, and even truckbed liner to provide an interesting, friction-accommodating texture. Beyond the quality of his product, Stains revolutionized volume accessibility by giving American gyms a place to buy these large pieces without paying for international shipping. Stains began creating volumes in 2009 and remembers a time when  he needed to pitch the idea of volumes to gyms! As the industry continues to evolve, new American companies are using advanced polymers to create larger and more interesting volumes.

Local volume designer and cofounder of Atriel, Jake Rasmussen, describes the process of creating volumes. Figure 1: cut high grade plywood into geometric templates. Figure 2: add t-nut holes, glue the pieces together, run backing through it (wood reinforced with screws and glue), and use a top of the line adhesive to reinforce. Figure 3: Finish by sanding the pieces and applying the mixture of paint and texture agents.

Momentum’s Head Setter, Steven Jeffrey, began climbing in the 1980s and started competing in his teens. However, Jeffrey only remembers seeing volumes appear in the early 2000s, claiming until that point all walls were simply vertical. When Jeffrey began working at Momentum in the early 2000s, he would build his own volumes for the gym. Jeffrey gravitated towards triangular shapes because these are the easiest to manipulate when working with wood. “The purpose of volumes is that [they make] it more like real rock climbing. It’s taking a flat surface and creating a more realistic climb [through depth].” Like an artist, Jeffrey’s creative process is motivated by an aesthetic look rather than just specific movement. As such, Jeffrey struggles to articulate the methods and reasoning behind specific volume placement beyond wanting to stir within climbers the desire to climb his routes. Jeffrey is considered a master in his trade and is sought out to teach clinics and set for gyms around the world due to his natural aesthetic for route creation and bold volume placements.

Today, Jeffrey collaborates with  Atriel co-founder Jake Rasmussen to create new volume shapes and clusters. “When I draw out the shapes I want designed it’s to fill a specific need. I can take the wall and drastically change the fill of that wall with volumes.” Together, Jeffrey and Rasmussen devised shapes that can be used in what Jeffrey refers to as Volume Trains: small triangular shapes that differed slightly in angle but were similar enough to fit flush against each other in endless orientations. Jeffrey explains the allure of Volume Trains to setters, “There are only so many moves and patterns we can set [on a climbing wall], but volumes change that.”

Jeffrey creates a Volume Train by mounting a single volume onto the wall, then piecing it together with other volumes.

This idea of using multiple volumes to create one large feature for a wall spurred Rasmussen’s creative process, allowing him to conjure a large image which he could break down into a series of volumes. Rasmussen is thrilled with the challenge of creating custom pieces with a specific wall in mind, but is passionate that the future of volumes lays in their versatile applications.

Beyond the ability for volumes to change a wall’s geometry, multiple volumes create an entirely new palette for setters to work with. They also have the added benefit of increasing a wall’s longevity by seeing most of the wear, and being easily replaceable. Volumes, like climbing holds, are attached to the wall using the existing t-nuts and are reinforced with set screws– a screw used to secure the attachment to the wall. As volumes have gotten bigger, new measures and precautions have been invented to maintain the volume’s structural integrity.

Rasmussen’s background is in carpentry, and he worked with Jeffrey to add an extra margin of safety to his volumes by mounting a cable to large volumes which can attach to the walls. Older gyms with concrete walls cannot use set screws and are thus forced to use longer (more expensive) 3/8 bolts to reach the wall’s t-nuts. Due to this limitation, older gyms are slower to adopt volumes because they cannot be properly mounted in an economical way.

While artificial climbing holds propelled the sport of indoor climbing in the 1990s and 2000s, look at any recent competition and it’s obvious that volumes are pushing an entirely new level of athleticism and performance. It is not any volume alone that makes this geometric structure an innovation in climbing, but rather the mindfulness and artistry needed to create a mosaic of volumes into cohesive and yet interesting terrain. The designer of Momentum’s walls, Brendan Nicholson, says that volumes eased the transition into Millcreek’s steep terrain by allowing setters to, in essence, adjust the climbing angle.

Since their inception, volumes have been literally reshaping the climbing industry. Whether plastic or wood, these large innovative shapes are manipulating climbing gym walls angles, and are even being used as holds themselves! Volumes give the setters and thus the gym members entirely new terrain with each new set. Many gyms today nest the budget of volumes within their hold budget, but if a gym’s walls can be seen as a canvas, then volumes are the beginning of the painting process.

“Evolution of The Climbing Hold.” News and Advice for the Indoor Climbing Industry. Climbing Business Journal, 25 May 2016. http://www.climbingbusinessjournal.com/evolution-of-the-climbing-hold/