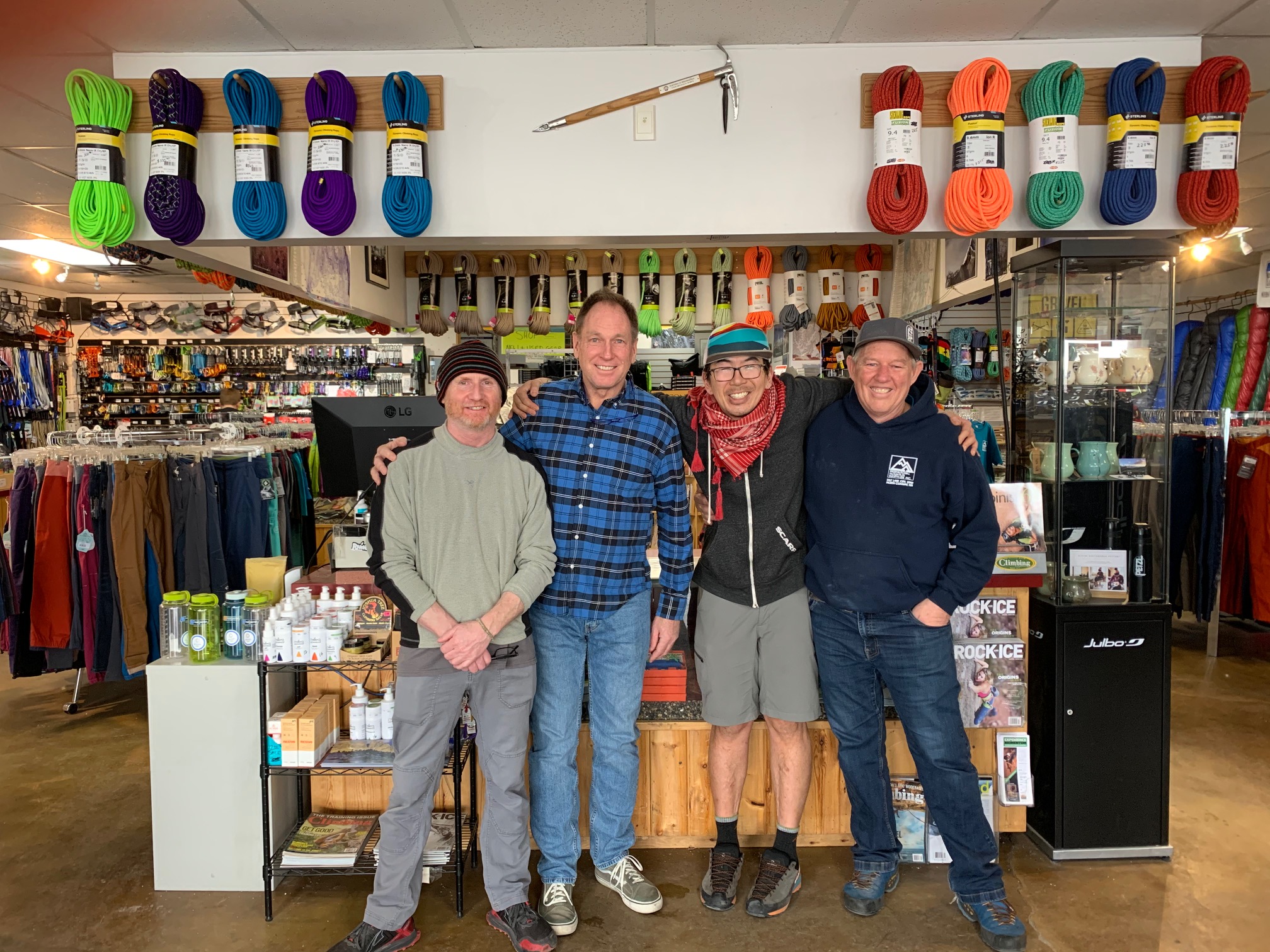 Around the corner from REI is a locally owned specialty climbing shop called International Mountain Equipment. This shop provides more than just cams, shoes and chalk. It is hands down THE place to exchange beta, swap stories and hang out with climbers who really know and love the sport.

IME has been a Salt Lake institution for over 25 years, employing influential locals such as Boone Speed, Mike Beck and Stuart Ruckman, to name just a few.  Open any local guidebook and it’s obvious the contributions these climbers have made to our area–Stuart authored both the Wasatch and the American Fork guidebooks. These days, when you drop by IME you are likely to run into Scott, Andy, Paul, Merrill or Shingo.

Scott Carson, aka, “Jimmy Dean,” has the biggest hands and fingers of anyone I have ever seen. With Little Cottonwood Canyon and Indian Creek as his stomping grounds for the past 30 years, Scott’s hands have swelled up into some mighty burly bear paws. He says his perfect hands are wide #3 Camalots.

Scott first visited Salt Lake City in 1979 to ski, but didn’t start climbing until he returned in 1986. He soon became the manager at IME at the original SLC location on Highland Drive. Scott, now part owner, still spends his time pursuing the best cracks in the Wasatch and throughout Utah while trying his hardest to avoid choss.

“Climbers come to us because we do the homework on all the gear,” explained Andy Ross, whose father started the original IME back in the 70s in New Hampshire. Originally from the Lake District in England, Andy moved to Salt Lake from NH where he worked as a climbing guide.  He has spent considerable time (and money) climbing all over Utah putting up new routes and considers the San Rafael Swell, where he and his father, Paul Ross, have put up many first ascents,  one of his favorite areas.

Paul Harvey has been around for the entire life of IME in Salt Lake City. After meeting the original IME guys at a Long Beach tradeshow in the 80s, Paul visited the store in North Conway, NH. As an owner of High Resort Adventures, Paul saw the potential for a specialty climbing shop in Salt Lake City. He convinced Rick Wilcox to open this IME across from the old Villa Theater in 1987. Paul and Rick worked together at the original location until a costly Everest expedition prompted Rick to sell IME to Andy, Scott and Paul.

Paul has climbed and guided around the world, including walls in Europe and Alaska. He frequents Little Cottonwood Canyon and especially loves the Dihedrals area.

Many of you who are regulars at Momentum may know Merrill Bitter as the weekday gentleman that sends every 5.12 in the gym. What you might not know is that Merrill has already sent everything in the Wasatch. OK, not quite everything, but darn close. I have heard Merrill described as the Chris Sharma of his time and that many of Utah’s most sandbagged routes were graded as such because developers feared Merrill might downgrade them.

“I started climbing back in 1976. I was 24 and I’ve pretty much shaped my life around climbing ever since,” said Merrill, “I decided that full-time employment wasn’t for me.”

Merrill got his start climbing the cracks and slabs of Little Cottonwood Canyon.  Before joining the IME crew, he was a fixture at REI for years during which he pursued first free ascents of aid lines, second ascents of the region’s hardest and putting up new routes of his own. Before climbing gyms became prevalent, he sharpened his skills on numerous brutalizing circuits in Big and Little Cottonwood. but later transitioned toward sport climbing in the late 80s and early 90s. This pivotal time of sport climbing development allowed Merrill to push his physical limits through projecting harder and harder routes.  These days, Merrill can be found projecting at Momentum with his usual climbing partner Wayne.

“I started climbing a lot of sport because there was a lot more to do,” explains Merrill, “I was always more of a project climber and sport climbing really worked for me and allowed me to push my limits.”

Before IME he worked at REI where he pursued first free ascents of aid lines, second ascents of the region’s hardest and putting up new routes of his own. Before climbing gyms became prevalent, he sharpened his skills on numerous brutalizing circuits in Big and Little Cottonwood. These days Merrill can be found projecting at Momentum with his usual climbing partner Wayne.

The newest addition to IME is Shingo Ohkawa. Obsessed with granite, Shingo is currently at the forefront of traditional development on some of the region’s best rock. He has a particular affinity for developing in remote areas with heinous approaches. Since moving here 7 years ago, this Eastern and Mid-Atlantic climber has developed routes all over the Wasatch, including in the Lone Peak Cirque and Hogum Fork.

“Every year I am surprised that I can do another year of new routes,” says Shingo.

I think it may have something to do with the approaches.

Besides new routing, Shingo is an active member of the local community and can be seen instigating the climbing/clean-up of lesser known granite gems on “No Star Tuesdays” in LCC. This Shingo-inspired event is described on its Facebook page as “(re)discovering the hidden gems in Little Cottonwood Canyon. The only rule is that your star-count must be lower than your pitch-count.”

The depth of experience and knowledge that these five climbers possess is as deep as their roots in the Salt Lake climbing community and beyond. It would be impossible to sum up the experience and expertise IME possess in a single blog post, but we hope you will stop in and learn something from such a great resource. Whether the beta pertains to shoes for climbing steep limestone at American Fork or the best way to get a full climbing session in LCC, the crew at International Mountain Equipment knows the Wasatch, its climbing, the local community and the equipment. We at Momentum can’t wait to be right next door to our IME friends with the addition of our new Millcreek Gym this winter.