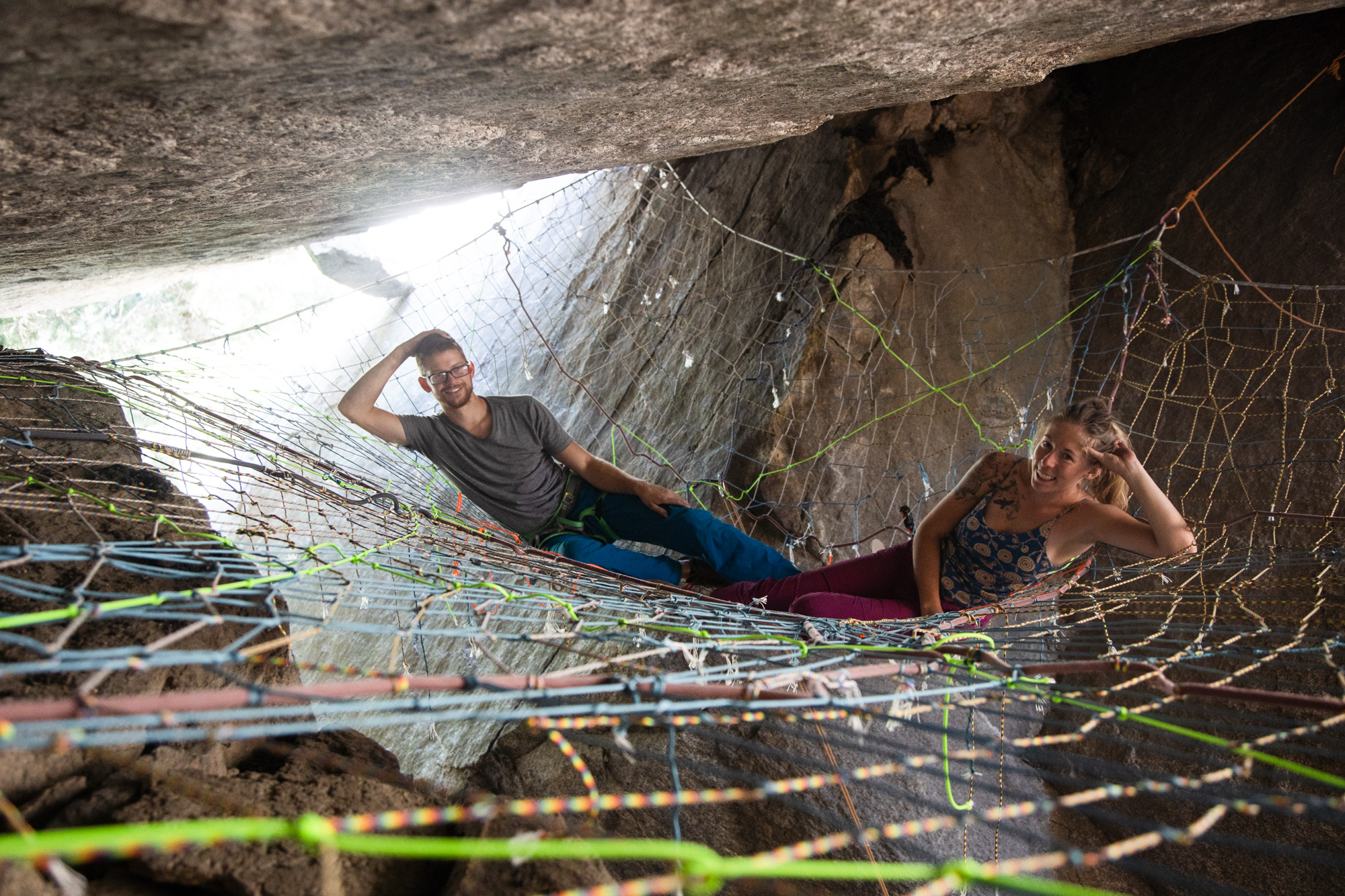 When the route description on Mountain Project casually mentions, “The route is an athletic event. Try not to throw up… or down. :-)” you know you’re in for it. But if Mason Earle gives you a giant circus net and you don’t have to worry about trivialities like multiple 4″+ cams, spotters, or a rope… you might as well throw a giant party with all your friends.

The Net Day crew up at Trench Warfare. Photo by Jon Vickers.

Homemade nets aren’t entirely fringe in the climbing world; they’ve offered occasional gawk-worthy viral videos fun rest-day hangouts for Creek fiends with friends in the desert highlining and BASE jumping communities. For many climbers, the idea is drool-worthy––no rope, no harness, no gear, no pads, no spotters. The logistical issues and objective hazards of the route fade, and you’re left with the stone and the movement. In the case of Little Cottonwood Canyon’s notorious Trench Warfare (5.12+), that just happens to be 60 feet of offwidth roof climbing. Fun? Well… We certainly think so.

Mason first schemed up his DIY net project for a roof crack in Canyonlands with some encouragement from his friend, Andy Lewis. Yeah, that Andy. Ten thousand feet of parachute cord, ten billion clove hitches, and couple severely tedious days of weaving work later, he had a 20 by 50 foot net to fall on when he’d rather forego a harness.

Mason on his Canyonlands roof crack project––the birthplace of the circus net idea.

Last summer, Mason took the net for a spin up at Trench Warfare, and was psyched to see how it brought together a little community and got so many people out on a route with such a unique style. This summer, that resurfaced in a big way with a little help from some friends.

Danny and Ashley, the mad generals of the Offwidth Army, have hosted numerous clinics at Momentum and shared their infectious enthusiasm for wide cracks with droves of climbers. Everyone who had the chance to experience a soft, bouncy catch on Net Day up at Trench Warfare have these two to thank. They lugged up the 70lbs circus net plus all the gear to rig it, spent hours slinging and tensioning the system, anchored the net to the ground, and repaired the cord where necessary. Through their efforts, Trench Warfare was transformed into a safe, fun (mega) boulder problem for Salt Lake’s climbing community.

Congrats to all who sent, big ups to everyone who tried, and a heartfelt thank you from all of us at Momentum to Mason, Ashley, Danny, and the community of climbers that makes Salt Lake such a phenomenal place to live and climb––both indoors and outside.