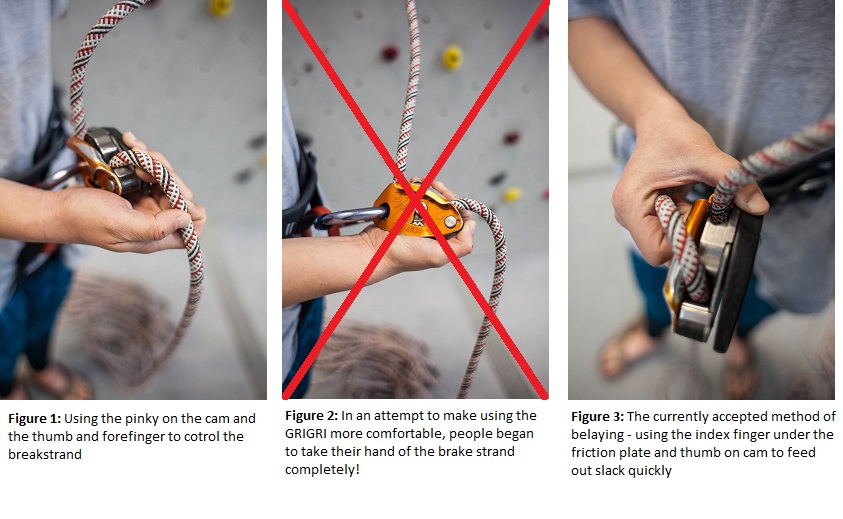 Innovations in Climbing: The GRIGRI

From the days of swami belts, buttonheads, and EBs, climbing gear has dramatically changed to maximize both comfort and safety. To appreciate and better understand this evolution, we’ve created a new monthly blog series: Innovations in Climbing.

At Momentum, the most prolific belay devices are assisted-braking belay devices, the first of which was Petzl’s GRIGRI, invented in 1991. And there’s good reason it’s caught on: climbers have moved from static plate and tubular devices to Petzl’s innovation because it facilitates belaying by holding a falling or hanging climber via a moving plate. This extra precaution in braking changed the face of not only sport crags, but gym climbing around the world—and that’s why the GRIGRI is this month’s featured Innovation in Climbing.

Originally, Petzl was a company primarily focused on caving equipment, but in the 1960s, Petzl shifted their attention above ground. To assist the transition, Petzl recruited mountaineer and inventor Jean Louis Rocourt as a technical consultant, and by 1985, renowned climber Michel Suhubiette joined the team as their liaison in Verdon Gorge.

In 1989, Ferdinand and Paul Petzl met with Peter Popall, Suhubiette, and 25 year old engineer Alan Maurice to develop a belay device that could reduce the risk of a figure eight descender. Ferdinand hoped to modify Rocourt’s Solo device, mainly to include a belayer instead of using soloing techniques. Paul turned to the Stop, a device invented by Ferdinand 10 years prior with the capability to lock the rope during simulated falls.

In an interview conducted by Christian Ferrari, Peter Popall recollects the meeting and how climbing with his 12-year-old son sparked the need for a device that could compensate a weight discrepancy between a larger climber and lighter belayer. Suhubiette elaborated on the idea, proposing a mechanism analogous to a seat belt.

GRIGRI’s Evolution: from two prototypes, to the GRIGRI, and eventually GRIGRI 2

Synthesizing these ideas, Maurice created the first prototype in 1989. From there “[Petzl] had to make a phase of adjustments and tests to determine the strength and limitations of the product.” Plastic was decided on for the lever to maximize comfortable handling, pictograms were engraved to ensure the rope is threaded in the proper orientation, and finally came the design of a single point pivot plate to keep the rope in place.

Popall explains, “Each product Petzl produces follows this process: Imagination, creation, testing, adjusting, and at the end of course, sale. As for the GRIGRI, it was an experience team, which combined everything to create a great invention!” During the meeting, Michael asked the group, “So have you gotten anywhere with your new grigri?” referring to the African good luck charm. And with that, Paul found a name for the device that changed sport climbing forever.

The GRIGRI 2 came out in 2011, and with it came several functional modifications. In an interview with Rick Vance, Petzl America’s Technical Director, Vance explained that the two most common user requests were to phase out the palm up belay technique and to allow for a larger range in rope diameter.

The original palm-up technique, as seen in Figure 1, used the pinky of the right hand to hold the cam down. The recommendation then was to use the thumb and forefinger to control the brake side of the rope. However, Vance explains, “It is conceivable that somebody could hold the cam open and the rope can slip through their hand.” Additionally, this palm up belay technique is not a comfortable position, and thus it morphed into “About the worst place you can be” [Figure 2].

Field suggestions and the desire for a palm down belay technique prompted the GRIGRI 2, as guides and instructors sought a method to use the GRIGRI while keeping the brake hand in a more powerful position. This was achieved with a new recommended use by Petzl: using the index finger under the friction plate (which they expanded in size), and pinching the cam where there is a small depression for the thumb [Figure 3]. The huge advantage with this method is the tight bend in the rope and 3-4 fingers tightly on the brake strand – even if a partner falls, your death grip on the rope will force the thumb off the cam. Around 2008, Petzl recommended using either belay technique, but once the GRIGRI 2 officially came out in 2011, they shifted completely to the newer and safer method.

The GRIGRI was designed for a 10mm-11mm rope, but as sport climbing evolved, so did the preference of 9mm ropes. The challenge thus became how to increase the diameter range (which became 9.8mm-11mm), while also controlling the rate at which a climber was lowered. Petzl’s solution was what they called the Progressive Descent Control. With the GRIGRI 1, the lowering function was essentially “On/Off”– the climber would either be stationary, or lowering at full speed. After years of R&D, Petzl’s engineers created a pin in the handle and a wave shape in the body, so that when the body is completely closed, the pin rides along the wave shape, levering the cam open. Thus, pulling the handle a long way doesn’t move the cam that much. This gives much finer control of the handle, and the handle can then adjust the amount of friction.

The addition of a wave in the body of the GRIGRI 2 (highlighted) allowed for Progressive Descent Control and is absent in the GRIGRI.

Similar to the first GRIGRI’s conception in a conference room of climbers and engineers, the birth of the GRIGRI 2 was the product of many iterations tweaked by a team. Today, there are many assisted-braking devices from the gamut of climbing companies, and all of them employ different technology to allow for the assisted-braking functionality. From Edelrid’s MegaJul and Mammut’s Smart, to Trango’s Cinch and Climbing Technology’s Click Up, there are plenty of assisted-braking devices out there with their own advantages and quirks. Just as the GRIGRI evolved its own set of best operating practices, it is imperative to educate yourself on the ideal use of any climbing device and be aware of its possible failure points. A belayer using a device they are familiar with is equally as important as the device itself!